I wonder what the URL for the cologne samples is? 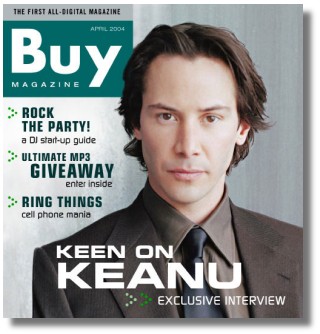 Don't bother looking at your local newstand for it because Buy magazine is the first all-digital magazine.

This month features Keanu in an article/interview. Most of it is nothing new, but I did like this quote...


What does the concept of destiny mean to you?

KR: Destiny is one of those tricky words. It’s one of those aspects that’s like a particle in a wave. Maybe the wave has a destination but the particle doesn’t quite know what the destination is and yet it’s making itself a part of that wave.

When you bottle that one Keanu...I'll buy stock!

Nothing new is just right, like the cover pic -
which first (?) appeared in March 2003 in the German movie mag Cinema...
Still, I can't ever get enough of Keanu!

On my own zafu, the particle is as much the wave as the wave is particle.

But he's close enough for me.

It always surprises me that folks call his intellect into question when he shows time and again, by answering the goofy questions of interviewers, that he is gentle and thoughtful.

I ask him what he was like when he was young.
"Private," he says. "Probably a pretty private kid."
Private how? Kids are usually pretty social.
"I was pretty social, too," he says.
Private but pretty social?
"Yeah." He half-smiles. "It's a particle, it's a wave."

So... he's considering getting a computer. Man... I hate to admit this but if I were famous I would be on the internet sneaking around, checking my fan sites ALL THE TIME! I wouldn't be able to help it. I'd make up fake names and talk with people, just gleeful as hell at the thought that they'd drop over dead if they only knew who they were talking to... oh, what a wretched person I am.

He's so smart and deep.

THANK YOU THANKYOU FOR THAT INTERVIEW it's been a while since his last, hasn't it?

Oh! V. is alive! Dude! I went to your old site to snatch your mail-adress for the Krix-Bday thing, and there was such a dramatic statement there that I was worried sick!
*slap* Don't do that again, eh?

And ah... Keanu talking about 'destiny' is always a good thing ;-D

I agree with you on the whole fan site thing smit....I definantly would be snooping my fan websites! I wonder if Keanu will do that if he does in fact get a computer, although he doesn't quite seem the type.

Is it only my irony-radar, or does anyone else find it odd to see Keanu's face on a magazine called "Buy" -- it's so 1984! Like big brother is telling us to go out and buy things...and keanu is pretty non-materialistic, from what I understand.

Will check magazine and interview out later..

speaking of cologne samples as you were, krix, did anyone report back on what that men's cologne was that Keanu supposedly wears/smells like?

i agree with you, bakednudel. Although i do wish Mr. Reeves was on sell if u know what I mean. Can you imagine all of us in a room bidding on him. He would die from embarresment!

i agree with you, bakednudel. Although i do wish Mr. Reeves was on sell if u know what I mean. Can you imagine all of us in a room bidding on him. He would die from embarresment!

I actually got a sample of the Helmut Lang, it's nice. Extremely subtle, but still masculine. There's a description in the comments of this post. Leather, Bergamot and Mandarin.

LOL! Smit...is shameful I say, simply shameful!...but then who am I to say, I'd be doin'it too...only I would make it look purposeful by calling it "gathering market statistics" or something...yeah thats it...yeah...*evil grin*

...as for the interview...and about that computer he plans to get...well my thought is that since he's going to be in Austin soon he should call up Michael Dell while he's down there and ask the man for a friendly donation...although they'd probably make him pay for it through marketing favors..."Hi, I'm Keanu Reeves and I'm sportin' my new Dell laptop right here! It comes in my favorite color too...black! So if you don't want to be caught in the "matrix" of some other brand...get yerself a Dell!"

It's the title of the magazine "Buy"...it set me off LOL!

Dell? Ugh!! Get a Mac, my darling. Be one of US... wild-eyed creatures clutching our mac laptops, hissing, "My precioussssssssss!"

Say, nudel, I know we've all accepted that our boy is nonmaterialistic but.... I mean.... well.... he does have a Porsche, several motorcycles, a home in the Hollywood hills, and probably one hell of a wine cellar.

This is not a complaint, mind you. I LOVE capitalism!

OMG! You use a Mac Smit??!! Mac vs. PC, it's like oil and water, apples and oranges, Keanu Reeves and Ashton Kutcher...it's...well...opposites! Can two people get along from such separate worlds???

I don't care in the slightest what happened to Steve Jobs. I love my Mac with an unholy passion that is nearly as psychotic as my love for K himself. I swear if my Mac and K were both in the water.... okay, I'd save K. But then I'd cry my f*cking heart out, and rock back and forth, and howl like a wolf.

If my house were on fire the Mac would be second only to my cats. And I'd just toss them out of windows so I could hurry up and scoop up my precious Mac and run out with it cradled in my arms like a baby.

By the way, why is Ashton the anti-Keanu, anyway? He's just some moppy-haired kid too young yet to have any particularly distinguishing qualities. Give him ten years, he may turn out fairly interesting.

Of course, it's easy to be noncommittal when you've never seen a darn thing he's been in. All I know about him is that Demi Moore walks around holding onto him like a handbag.

Smit, I dont imagine your darling cares which platform you use as long as you keep writing ;-). About the Mac thing...actually, I've experienced that... but the evil ones made me convert early on, they said the Mac can't be "networked."

I have an unholy passion for technology in general LOL! *walks away to go repent*

Allison, that is certainly an interesting idea....

Posted by: Cornflakes on April 21, 2004 11:28 PM
What's on your mind?.....
(new here? please read this before commenting)
Remember, this is a fan site.
Keanu Reeves is in no way connnected to this website.
Please do not make a comment thinking he will read it.
Comments are for discussion with other fans.
Thank you.