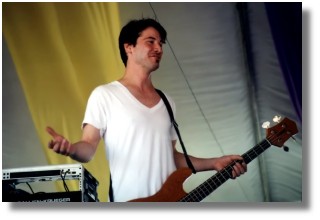 I'm still blown away by the birthday love. Rereading the comments and emails, stumbling into the kitchen and seeing the roses on the table....

Have I mentioned Wow...just wow.?

I'm going to hold it all in a very special place. I know I said I wasn't going to have a team of trainers in my 37th year, but I've got the best damn bunch of friends and support network a person could ask for. I pretty much feel like I can do anything.

becky plays HOB on the Sunset Strip tonight. I hope everyone has a great time and I will see many of you tomorrow (eeeeee!)

Speaking of the Sunset Strip (see how I did that?), a film I think I've been waiting for since I came into online fandom: Mayor of the Sunset Strip- by and about Rodney Bingenheimer, is finally seeing a limited release. Keanu makes a 2 second appearence in the trailer, which you can see here (via keanuweb). It looks like a really interesting film if you love LA rock and roll. Keanuette saw it in London last fall, and has a good write up.
Check the official site and see if it's coming to a theater near you.

Glad ya had a great birthday Krix! :)

I've heard of that film, but don't really know much about it......whats it all about?

Back to reality yet??? If it didn't mean getting older, I wouldn't mind at least two birthdays a year, myself...

...and if you blink while watching the trailer, you'll miss Keanu's appearance. After all the fuss that's been made about him being in the film, I expected a lot more!

Oh, I forgot: you don't have to go back to the banal and dull routine of the real life yet, there's still becky at the Green Valley to come, lucky you!

Yes, heard of this film and hope to see it. I saw a blurb about it in the newspaper in MI, and saw something on TV. Will watch the trailer as soon as I have a free moment.

Glad you had a great birthday Krix, have a great weekend too!

I have never had any doubts about your ability to do anything you wanted.

You blow me away every day you blog. :)

Aw, I am glad that you enjoyed your bday krix....hell...just cause you don't have any trainers doesn't mean that you don't have a lot of people that love you here and accually get excited to see what you post next!!!!! Rock on...

By the way, is that him speaking on the mic afterward? I can't believe I can't tell....

By the way, is that him speaking on the mic afterward? I can't believe I can't tell.... on dogstar

Posted by: Cornflakes on April 15, 2004 07:59 PM
What's on your mind?.....
(new here? please read this before commenting)
Remember, this is a fan site.
Keanu Reeves is in no way connnected to this website.
Please do not make a comment thinking he will read it.
Comments are for discussion with other fans.
Thank you.