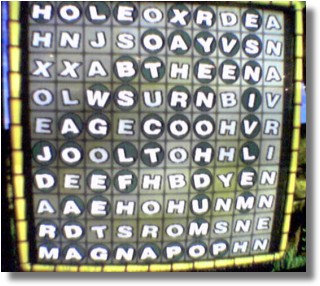 Eric sent me this picture of an electronic puzzle game in his bar. See if you can figure out why.

note: don't click the comments unless you want the answer

I think I got it! If you read the darker circles in all different directions (up, down, across, etc.) you'll see that they spell different rock group names. The top row says "Hole" the one next to it going across says "Jawbox" the one going down says "Everclear" and so on. But I think the one that really stands out the most is the name "DOGSTAR" going across right below "Jawbox"

Hey Nettie, we think alike. I saw Melvin too! ;D

There's also Deftones and Nirvana.
I think it's spiffy that Dogstar is in there.

I know! LOL! Now back to the regular program ;-D

It's so cool that dogstar is actually mentioned in this! Respect from bar-games at last! :-D

I only saw MELVIN upside down, but now that Michelle has pointed it out I can see Dogstar!

Posted by: lucid on April 2, 2004 05:57 PM
What's on your mind?.....
(new here? please read this before commenting)
Remember, this is a fan site.
Keanu Reeves is in no way connnected to this website.
Please do not make a comment thinking he will read it.
Comments are for discussion with other fans.
Thank you.