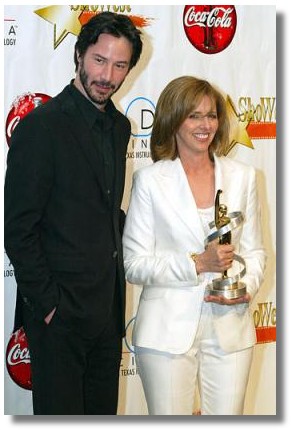 Apparently, I'm such a slacker that I need a heads-up from Australia for a blurb in my local paper (thanks kaz!).


Reeves came to ShoWest to give the director of the year award to Nancy Myers, who directed him in the box office hit "Something's Gotta Give."

"She writes real personal work. What is that? The Nancy Myers je ne sais quoi?" Reeves said laughing. "She's someone who has real insight into what she wants to see. She won't move on until she gets 'it.' "

Myers, whose projects include "Baby Boom" and "What Women Want," said "Give" has been her favorite movie experience, adding co-stars Jack Nicholson and Diane Keaton "loved working with Keanu. He's fantastic. He's perfect."

Someday I'd like Keanu to use a french phrase when referring to me. You know, "Joi de vive", "Menage à trois", "Pouvez-vous repasser ce linge?"

And if you missed the coverage on ET due to frikkin' basketball, you can catch the clip here, thanks to Keanu Soul via Club-Keanu.

And speaking of the Club, as always Chicks is on it with screen shots and press photos of the whole ShoWest shebang so check it out.

Ménage à trois???
Consider this to be my application for the #3 spot!
... but I hate ironing!

That would be the most important question, n'est-il pas ?

Yup, that would be my choice. *smiles*

Wow, Zen. I'd settle for a curt "Allons-y" and thumb jerk in the general direction of his car.

I hear you Mikey...does seem that way at times. That's really beautiful Zen, what a proclamation. But he's got a lot of fans, so probably have to lower expectations down there with Smit lol!

It's okay shelz, I already got a guy doing that anyway. *wink* I was just showing off my French. ;)

We always knew you were a lucky girl Zen

Posted by: shelz on March 28, 2004 08:40 AM
What's on your mind?.....
(new here? please read this before commenting)
Remember, this is a fan site.
Keanu Reeves is in no way connnected to this website.
Please do not make a comment thinking he will read it.
Comments are for discussion with other fans.
Thank you.