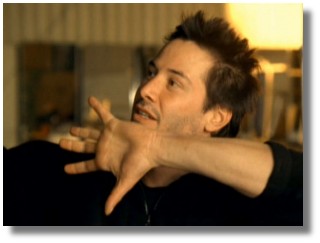 \juh-STIK-yuh-layt\, intransitive verb:
To make gestures or motions, especially while speaking or instead of speaking. 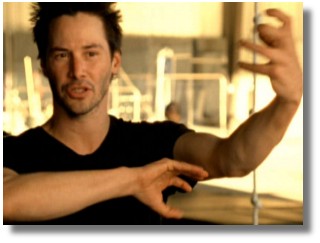 Muscular imagery. We think with our bodies. We often represent things in a kind of muscular imagery created by actions or implicit (unexpressed ) actions. 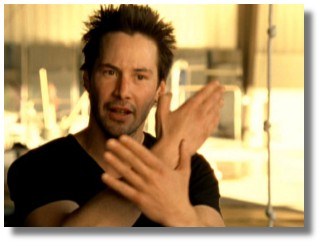 People who "talk" with their hands are using gestures to help themselves think as well as to communicate. A great deal of information is contained in kinesthetic sensations (feelings from the muscles and joints). 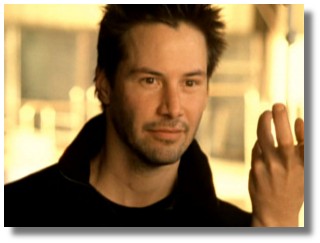 As a person talks, these sensations help structure the flow of ideas (Horowitz, 1970). It is impossible not to demonstrate when attempting to describe some things.

Great pictures and such a wonderful definition to go with them. :)

I've already said how much I adore his gesticulation: it makes him so Italian. You know, we tend to "speak with our hands"...and Keanu is only North American celebrity I've ever seen so inclined, and good, at using his hands, and arms, to exspress himself. He's so endearing when he does that!

Honest to God Krix...is that even a word???!!! I guess they have words for everything nowadays LOL!

...but seriously, I love when people "gesticulate" because I do it myself!!!

Ah... I love those pictures. This is a man for whom I would embrace or abandon any religion... live in any country.... try just about anything at least once... in fact, that might be the best part...

The way he seems to talk with his whole body - it's delicious to watch, and he's got sooo beautiful hands!

Gotta admit, I swooooon when he does that...and those hands, oh those marvelous mitts...

Thanks for sharing those lovely gesticulating pics!

I love those pics! He can talk to me with those hands anyday! I love the emotion it shows and the interest in whatever he was talking about!

Hi Jeannie.
There's no need to sign your comments, the name you enter in the form is posted automatically below.
:)

Gesticulating is sexy. Seriously, I tend to think of someone who uses embraces whole body communication as more free and open to new experiences, as far fetched as that may sound.

thanks for those photos, especially since i don't think i have seen them before. do they come from a particular interview? and if so, is it available online anywhere?

i love the way he expresses himself, too, with such attention to what he's saying and such passion about communicating. it makes me think that his work as Neo, which is so still and restrained, has gone largely undervalued.

Bea, I'm pretty sure these are from The Matrix Revisited. Someone correct me if I'm wrong.

Posted by: Zen on March 16, 2004 12:49 PM
What's on your mind?.....
(new here? please read this before commenting)
Remember, this is a fan site.
Keanu Reeves is in no way connnected to this website.
Please do not make a comment thinking he will read it.
Comments are for discussion with other fans.
Thank you.