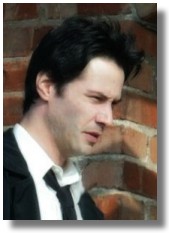 SuperheroHype has an interview with Keanu on the set of Constantine. This article was originally posted by SHH in December, then pulled for some reason. Maybe because it's chock full o'spoilers. Anyway, it's back up now. Read at your own risk.


You've mentioned that the character has an ambiguous morality that you found attractive.

Yeah. Well, I mean he's not the nicest guy all the time. I don't know if he's immoral, but it's something that he's negotiating with.

Were you just looking for this kind of movie?

I was looking for a good script and this kind of came my way and I really liked the writing and the character itself and what happened in the piece and ultimately there's a line in it where Constantine says, "God has a plan for all of us. I had to die twice just to figure that out. Some people like it, some people don't."

He's always been a user in the comic. Is he nicer in the film?

Go to SHH to read the whole article, but remember there are spoilers.

Ooo:) I was a bit hesitant in thinking of enjoying the movie whole heartedly (ie reasons other than keanu content); after this interview which gives a decent amt of info though spoilery I know it shouldn't be just like all the other stupid "dark super hero" movies that have come out recently and are to bust all over this coming year (daredevil was...uhh...and then soon will be van helsing, the punisher and others will come out...)
Constantine should hopefully stand out :D

Yeah, I knew I was seeing things...

And there's a big ol' fat Revolutions spoiler in there if you haven't seen that yet...unlikely with this group, I know..

Hey krixy, the Matrix was nominated for quite a few VES awards (as noted here: http://www.cgnetworks.com/story.php?story_id=1895). I think they won a couple, but haven't heard too much about it yet. If I find out I'll keep you posted.

Er...sorry for being off-topic. :D

Yeah--bakednudel's point is exactly what I was thinking: sounds like it should be R and will be cut back and was meant to be the R rating--
I hope they DONT tame it: It sounds really stand-out from the dark superhero movies the way he described it--hopefully it'll be that vivid too; should make for a great supernatural-dark-hero movie:D
(if they tone it down Constantine's Hellblazer fans will get more mad at the american cinema like any normal movie goer that understands you dont cut a movie to make it pg-13 to make money when it could be a much better film without the slice and dice! movie-makers already changed the main character to a pt, etc, ya know?
-->hey: praise to the wachowskis for not letting anyone pg-13 their films!!!!)

i hope they don't tame it, either. Isn't the editor/studio content decision one of the things what changed JM from being all that Gibson wanted it to be?
:)

I think in one of the earlier interviews, Keanu did talk about the fact that it's PG-13, so I think it's been that from the beginning. And who knows? I have a very poor understanding of why things are rated as they are. Joel Silver claimed at one point that the Matrix films were R because of martial arts kicks to the head. It's entirely possible that you can do as much darkness and gore as is necessary with the PG-13 rating, as long as there is no nudity or what passes for "drug" use in the US? I just don't know.

Posted by: bakednudel on February 20, 2004 04:02 AM
What's on your mind?.....
(new here? please read this before commenting)
Remember, this is a fan site.
Keanu Reeves is in no way connnected to this website.
Please do not make a comment thinking he will read it.
Comments are for discussion with other fans.
Thank you.