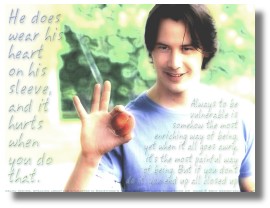 DVDanswers reports that Something's Gotta Give (R1) is due to hit the shelves on March 30. (via keanuweb)

No word on extras, though I imagine there'll be a few. Did "What Women Want" have directors commentary? If so, then I expect SGG will too, along with a "featurette" or something.

I'll be searching for the easter egg that contains Dr. Julian's pager number.

You can pre-order it at amazon.

Just dreamy, krix! I had just replaced this pic with the Barcelona chair for my desktop, but thank you for this beautiful one! (downloaded for further study--of your photoshop methods, as well as for my spring desktop)

I am such a geek.

Now that is one gorgeous wall, thank you....

Peachilishous! I really like the effect you did on the photo. He glows!

What women want? I'll tell you what women want. We want to be the peach heading toward that mouth, that's what we want.

I want to be his belt, his wallet, his comb, the rain that lands on his skin, the lint in his pockets, the dust mote in his eyelashes, his wrist watch, every fork he touches, the clouds he rides under, the towels he dries dishes with, his pillow, his remote control... oh, I really want to be the remote control... the bass... his seat belt... every cigarette he smokes, every cup he drinks out of...

Okay, time to sober up.

Wow, that seems like a really early release date...NOT that I'm complaining, mind you. I'd be happy if they had DVDs for sale in the lobby after you watched a film. I'm sure that's not quite the money-making strategy the studio guys are going for! :) But, YAY for us. The Spring DVD season is really shaping up.

And last, but not least....*Beautiful* wallpaper, krix!

i recently read (in Entertainment Weekly) that SGG was somehow released online due to some problem with one of the academy members being lax with their viewing copy. i bet this is why the dvd date is so early. but who cares WHY when we're getting Mercered in march!!

Amen to that, lori!

Nice wallpaper Krix. Thanks! I was going to say "dreamy", but bakednudel already said that.

Thanks for the wallpaper Krix. What a nice breath of fresh warm peachy air! It's so cold here today in Illinois that I needed some warm spring thoughts to look forward to. :)

Posted by: Lisa on January 22, 2004 06:43 AM
What's on your mind?.....
(new here? please read this before commenting)
Remember, this is a fan site.
Keanu Reeves is in no way connnected to this website.
Please do not make a comment thinking he will read it.
Comments are for discussion with other fans.
Thank you.