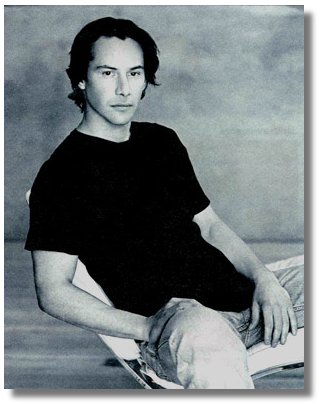 Keanu A-Z has a great article from The Times UK, Life After Neo. Go check it out....

The quotes are great aren't they? I've put all of them in the quote database on the site.

Yes, very good quotes...thanks so much for posting it :)

Thanks again, keanuette! What a wonderful thing to wake up to..!

"But whatever life experience I have is who I am, and so whatever that is comes with me."

...*blinkig cursor*
my mind´s wandering with breeze on the hills
"whatever that is " it comes with him!
oh, wake up, vika! you have to go sleep, it´s 1AM, i whish myself keanudreems ;-)
*sigh*

Thanks Nettie! For the pics and the article.

Off topic, but still very interesting:

My husband was watching football on Fox tonight, the Carolina Panthers vs. the Philadelphia Eagles for the NFC championship. The commentator, one Joe Buck, was talking about Carolina quarterback Jake Delhomme saying how this guy is so calm all the time, nothing fazes him no matter what happens in the game. Mr. Buck said, Delhomme is either the best actor in the world ranking up there with Tom Hanks, Jack Nicholson and Keanu Reeves, or else he's the most unassuming person in the world.

Hee! I love this guy!

I'm watching that right now!!! how did I miss that comment?!

Darn, I missed that comment too (I only watched the Panthers vs. Eagles game off and on), BUT I'm beginning to think Mr. Buck is a fan of Keanu's. Earlier in the year, in a Oakland A's baseball game televised on FOX he mentioned how Barry Zito (pitcher for the Oakland A's-Cy Young Award winner) came to the stadium wearing a hat and shades and jeans and sandals (Barry is a very casual dresser and has a kind of "quirky" fashion sense). Mr. Buck's comment was "He (Barry Zito) looked more like Keanu Reeves than a Cy Young Award winner." Or something to that effect. That's probably more than you wanted to know, ;) but I think it's cool that Mr. Buck put Keanu up there with ACADEMY AWARD winners Tom Hanks and Jack Nicholson. :) I think deep down *most* guys think Keanu's cool, even if they don't admit it. Or want to be him. JMHO

Zenny, I heard that, too! I was just walking in the room where the game was playing and thought "did someone just say Keanu Reeves???". So, I ran to rewind the Tivo just to make sure I wasn't hearing pretty voices in my head again. ;) That definitely made me smile! Seems you can't escape references to him. Will & Grace were lovin' on him (on a re-run) the other night.

And, Judee...
You're absolutely right. Given the chance to be Keanu, any man when being TOTALLY honest, would gladly offer up his left *well, you know* to do so.

COMPLETELY OFF TOPIC but....
Zen--are ya a frozen popsicle, babe? Or has the weather warmed a bit up there?

I hate football, but that guy has good taste in words! Ohhh love that pic of Keanu!! I was watching him all nite instead of football..:)

rj, pretty voices in your head! LOL
I saw that Will & Grace episode, the one where they talk about renting Point Break and eating ice cream? Grace says something like "Hmmmmm, chocolate, chocolate chip and Keanu in wet black rubber. That's a whole lot of sweet."

Did you ever catch the one on "Blossom"? Blossom's older brother was getting married and during the wedding, the camera focused on each of the characters one by one and you could hear what they were thinking. When the camera reached Blossom she was thinking "This is nice, but I think I want to have an outdoor wedding. The wind will blow through my hair... and Keanu's hair." Then the camera moves to her friend Six and she's thinking "Things are going to be totally different when I marry Keanu." This was right after Speed came out. There was also one on "Full House". Stephanie's friend rented a Keanu Reeves movie and Stephanie asks which one. Her friend answers "Who cares, he takes his shirt off." And they run giggling upstairs.

And yes it has warmed up about 20 degrees, so I'm thawed out now, but today we're having a snow storm! We're expecting over a foot of snow. O Canada!

Can we send this Joe Buck a nice floral arrangement, or maybe a strip-o-gram?

I've seen that episode of Will and Grace, Hee! There was a reference to him on Smallville once, too. Chloe and Lana were going to have a Keanu movie-fest. Something about his big brown eyes making you forget the problems of the world or something.
You'll never get me to admit to ever watching Blossom, though ;)

I used to watch all of those shows.. and Especially Blossom.. I was gaga for Joey Lawrence..:).. Thanks Krix, and Keanuette for the article and the pic. you guys RAWK!!
hugs and God bless

Yep, I'm all for rewarding Mr. Buck. I'm sure he'd appreciate some luscious stripper carrying a Matrix balloon bouquet (black & green balloons). I wondered what Keanu was thinking, if he was watching the game. How strange, yet flattering, it must be to hear yourself as a "reference" so often on TV. :)

I never really watched Blossom, but that scene sounds TOO funny!!

God, I'd love to be his left hand in the picture you posted with this entry. *blush*

Hee! I'm home early from work, bundled up in one of my husband's cozy sweaters. Snow can be fun! By the way rj, from what part of the world do you hail?

There was also a brilliant reference to Keanu in 'Six Feet Under' a couple of series back. Claire was describing her boyfriend to a classmate and said someting like "He's cute, he's sweet .... he's got his own band.". The other guy replied "It's Keanu Reeves, isn't it?! I just loved that series, so it was surreal to see the two things coming together. There was also a reference to Viggo Mortensen (second prize in my raffle) in a later episode. Keanu'scertainly part of the zeitgeist for a lot of people.

Julie!~
You're just a devilish little minx, aren't you!

And Zen~
I'm from Texas--Dallas, actually...land of big hair and bigger boobs (no offense to any friends here who may share these attributes!) :) Also, land of where the mere *mention* of snow throws the entire area into a major tizz! 3 inches is a blizzard here.

I also remember a great reference to him in the movie, Sugar and Spice, the girls (Mena Suvari, one of them) were watching Point Break and they then got their idea for ripping off banks to get $$. I don't remember her exact words but at one point, Mena says, shut up and just watch Keanu..his name must have been said at least 3 times..funny-we were flipping through channels and came upon that accidently and I was like-HOLD IT-call it perfect timing ;)

Same thing happened to me. I caught that movie at that exactly moment. It's funny how your ears prick up at the mention of 'The Reeves'.

the only reason i rented "sugar and spice" was because of that reference. a friend told me about it, and i figured if the girls liked keanu and were inspired by his movie, they might be alright... and yes, he really IS everywhere, isn't he? except for right here, right now, with me,dammit. :(

Posted by: lori on January 19, 2004 05:44 PM
What's on your mind?.....
(new here? please read this before commenting)
Remember, this is a fan site.
Keanu Reeves is in no way connnected to this website.
Please do not make a comment thinking he will read it.
Comments are for discussion with other fans.
Thank you.