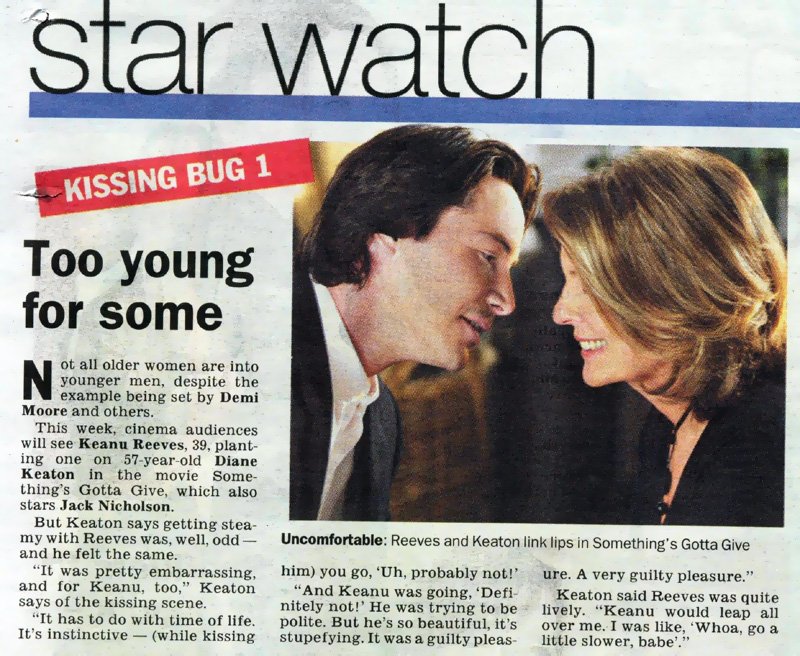 "So beautiful it's stupefying."

That sums it up pretty well. In the movie, when he jumps over the back of the couch and starts walking toward her, I just lose the ability to think in words.

Reminds me of Ted 'Theodore' Logan...;) [that hop and then he runs round the corner...]

Bethanie, you said it so well--that couch jump is about my favorite moment in movie history. Although as my friends will attest, any time I see Keanu I "lose the ability to think in words." I know this, because I've been trying to explain Keanu's appeal...and all I end up writing is "..guuuuuuuuhhhh"

And to think, I have an advanced degree. Obviously not in Keanu Studies.

That's why I love krix's postings so much--she never loses the ability to write about Keanu!

I have been trying to describe it to myself (hence the bizarre ramble earlier about the mechanic.) I think a lot of women who are intelligent and well-educated (I have an M.A. and three years in a doctoral program) have fallen for our boy's otherworldly charm.

But this... him... I just don't know where this fascination comes from. I don't like mysticism. I don't believe in god. I have no affinity for "spirituality" or magic. And this fellow sometimes seems like the embodiment of everything I reject. He hits me in a spot where my mind has no control and all my analyses do nothing toward mitigating the impact. I just stumble around with a buzzing in my head.

Hey, ladies, I'm in good company, it seems! I have a doctor's degree in German Literature and an M.A. in Political Science and Journalism - so you have me here... I just can't begin to describe this phenomenon that is Keanu Reeves. He always leaves me speechless, stammering, incoherent, when people want to know why... so it must be some sort of sex thing and maybe a kind of emotional deficit on my part, well, erm, I think, I'm still at a very low level of Keanu Studies... *turning beet-red*

Niobe, if you even try to talk about it with anyone you're braver than I am. I've tentatively admitted to a few people that I like him as an actor and Christ, it's like when they find out I'm a Republican. People just freak out on me.

...I'm not brave at all, Bethanie, it's just common knowledge among my friends, as I've been afflicted with Keanuitis since "River's Edge" came out - and no, this disease is neither debilitating nor contagious - it only leaves you with a fuzzy feeling in your body and some mushy mass where your brain should be... Anybody know of a Sanatorium where fellow sufferers can exchange Keanu-Lore together, watch his movies and swoon collectively?

the reason we cannot explain him is that he is sublime. there ARE no words...more like a state of being...this from yet another keanu fan with a PhD...

Wow! I suddenly feel like I should be in a "special" class, wearing a helmet and drooling. ;)

krix: Aren't you proud to have the most intelligent Keanu site on the net? (Although, I'm afraid I might reduce the IQ average).

Well, ladies, this is just more proof that Keanu transcends geographical, educational, linguistic, and political boundaries because he is just so damn hot.

It goes without saying that any Keanu fan, just by virtue of being a fan, has an above average intellect.

Krix describes the buzzing that you hear as "white noise."

I understand it goes well with vanilla flavored stoli.

Tyler, me too! A law degree I mean. And I'm doing an MBA right now. krix has a post somewhere here with the subject "Why do smart women like Keanu?" I don't remember where, but we should maybe look it up again.

Found it. November 16, 2001. She's asking US to ponder though, so not much help. I haven't checked the comments yet however.

Yowsers! I think it must've been fate that led me to continue on with my college classes this semester. And it's a good thing, too. You ladies are impressive company to keep!

Where do you practice. I am in California.

Thinking about going for my LLM. How's that for overachieving fans?

Of course I can always use that helmet of rj's while drooling and falling over the pictures on my hard drive. :)

Who said the harder/more complex the work, the greater the need for play?

Keanu is my "play" thing.

So, am I the only one who finds this feeling more of a torment than a comfort?

I'm on the East Coast in Canada Tyler but after 7 years of practice, I quit to do something else. That's why the MBA.

This is an impressive and scholarly group :) Not to forget the intelligent masses that, for whatever reason, never made it through high school, let alone college, of course. One of the things that I admire KR for is his purposefulness. He knows what he wants, pursues it and finds success-in spite of the naysayer. Some of us are late in years and long on education and still trying to find our way. Of course, it doesnt hurt that hes so beautiful; but again, not everyones able to take advantage of beauty in such a noble way. *swoon* the man's so smart *sigh*

It is impressive. It's nice to know I have the makings of a formidable legal team, should I ever need.

not too young for my mom who was ready to fight me for him!!!! hey, wasn't there supposed to be a 'love scene'??? i certainly wouldn't call what i saw a love scene.

Posted by: laura on January 5, 2004 01:50 PM
What's on your mind?.....
(new here? please read this before commenting)
Remember, this is a fan site.
Keanu Reeves is in no way connnected to this website.
Please do not make a comment thinking he will read it.
Comments are for discussion with other fans.
Thank you.