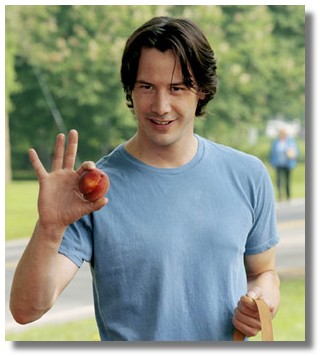 Peach of a guy

Turns out Keanu's not that tough to figure out

NEW YORK -- Look up enigmatic in the dictionary and you might just find a picture of Keanu Reeves. All those synonyms from secretive, ambiguous and illusive to indecipherable, paradoxical and inscrutable certainly apply.

Here's the guy who went from playing a goofball in Bill & Ted's Excellent Adventure to having one of the most excellent contemporary careers in Hollywood. It could be construed as pure good fortune that he stumbled into the thriller Speed -- but it was more than luck that kept him from doing the disastrous sequel.

He easily could have passed on The Matrix after tanking with Johnny Mnemonic but instead parlayed an almost identical sci-fi performance into a movie icon.

His co-stars talk about how erudite, personable, humorous, sweet and kind he is yet he has long been an infamous interview subject.

In round-table settings and at press conferences his answers are cryptic and his demeanor defensive.

So it was with no small amount of trepidation that I approached our one-on-one interview for the holiday comedy Something's Gotta Give.

The first thing that struck me was that he is more imposing in person than he is on screen.

He's every bit his 6-foot-1 and he has hands like baseball mitts, but there's a gentleness to his handshake.

Q: You've had quite a remarkable career since your feature-film debut in 1986 in Youngblood. Did you have a plan when you first started out?

A: I didn't have a plan but I had a hope. I hoped I'd be able to make a living acting because I loved it so much and I hoped I'd get the opportunity to make quality films and work with some of the best actors and directors in the business. I also hoped I could have a career that would allow me to do stage work as well as film."

Q: When you look back, can you remember those early days in Toronto?

A: Like it was yesterday. I arrived in Toronto when I was seven. I went to four different schools and I'm proud and happy to say I still have contact with friends I made in those early years. I love the city and always have.

Q: At what age were you bitten by the acting bug?

A: I started taking acting classes at the Jewish Community Centre when I was 15 and I got my first agent when I played Mercutio in a (community) production of Romeo and Juliet when I was 16. I did a Coke commercial and that led to my first professional acting gig (as the title character) in Wolf Boy, which lead to Youngblood.

Q: When you auditioned for Wolf Boy had you already made the decision to pursue acting as a career?

A: Before I went out to audition for Wolf Boy, I was managing a pasta place. I'd worked there so long they'd made me the manager. One day a woman who was working for me asked if she could have the day off so I was trying to rearrange staffing. I suddenly realized this was not what I wanted to do with my life, so I quit. I walked out of that place and over to the auditions and got the role in Wolf Boy.

Q: Were you surprised when so many people were surprised that you decided to star in the Manitoba Theatre Centre's production of Hamlet?

A: I would have preferred if fewer people were surprised. I want to do more stage work. Before I left Toronto for Los Angeles, I would audition regularly for the Stratford and Shaw festivals. I still harbour a dream of being part of either of those companies for a season.

Q: Is there another Shakespearean role you covet?

A: Absolutely. I'd really like to play the Scotsman in "The Scottish Play."

Q: At what point in your career did you finally concede this acting thing was working for you?

A: I haven't said that to myself yet. I really haven't. It would be foolish of me to pretend things haven't worked out well for me financially but that's an exterior thing and that's what other people tend to gauge an actor's career by. Personally I feel like I'm still searching. I'm still trying. I'm still working on my craft on almost daily basis.

Q: Is it difficult at this point in your career to let people into your life?

A: In terms of my personality, my sensibility and who I am, I'd have to say it hasn't changed all that much. I really trust people until they show me that I can't trust them. When I meet people, I try not to have expectations but I also try not to be naive. I don't want to have to put up any unnecessary walls but I also don't want to leave myself unguarded. Talk to people who knew me in Toronto 30 years ago. That was true of me then just as it's true of me now.

Q: Here comes the inevitable Matrix question. Are you relieved it's all over and that you will soon be able to stop talking about Neo and The Matrix?

--By Louis B. Hobson

(Thank you to Shae)

Thanks! I loved the interview.
I love the fact that is is really down to earth & genuine.

*SIGH* So sweet, geniune, humble....like water in my desert

Thank you krix and Shae. :D

Thanks for passing this along...you know I read these things if they pass the krix test and nowhere else. Sweet interview! I'd love to see him get a chance to do a season of Shakespeare.

Thanks also for a Winston Connelly pic I snagged, I searched your site and knew you would have one, when googling got me nowhere.

Nudel, I think KCRL.net has a whole bunch of screen captures of The Night Before in their Saturday Cinema section. Much Winston to be had.

Posted by: w on December 8, 2003 05:05 PM
What's on your mind?.....
(new here? please read this before commenting)
Remember, this is a fan site.
Keanu Reeves is in no way connnected to this website.
Please do not make a comment thinking he will read it.
Comments are for discussion with other fans.
Thank you.