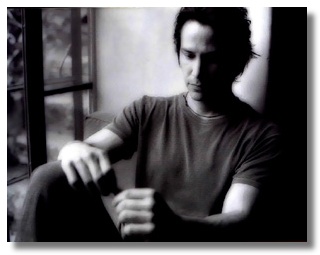 Keanu Reeves, who reportedly collected $30 million plus 15 percent of the gross for his two "Matrix" sequels, was eager to take on a small supporting role in the new film "Something's Gotta Give."

"For me, trying to do different kinds of roles, it was a wonderful opportunity, really, just to do something different," Reeves said.

Reeves plays a doctor who treats Jack Nicholson's Casanova-esque Harry [Sanborn] for chest pains and finds his own heart thumping when he meets an accomplished playwright (Diane Keaton). Although the physician is a decade younger, he pursues the attractive 50-something, not knowing he has a rival in [Sanborn].

The actor doesn't find it so odd that he's not the film's leading man. He coveted the "Something's Gotta Give'' role so much that he auditioned for it.

"You laugh, but it's true. Often, you have a gut reaction to scripts you read. . . . You're always looking for good material. I mean, I love acting. Look at Jack Nicholson. He's 66 years old, I think, and he's making movies. He's doing his thing. Does Jack Nicholson have to go and make a movie? That's what we do.''

Yet it wasn't the younger man-older woman scenario that intrigued Reeves.

"Some people speak of this film as being age-oriented, but I would say that it's 'ageless-oriented,' personally,'' he said. "I think that it's about taking a risk, opening up, and somehow it seems so terrifying to open oneself up to another. We see these two beautiful, brave people in this film, Diane Keaton and Jack Nicholson, just kind of open up to each other. We get to enjoy it and see it on screen."

Yes, I know I shuffled the pictures and am re-using this one, but the peach one goes better with the previous article. Plus I really love this one.

I THINK I NEED A HOUSECALL DR. MERCER.

Housecall....Definitely. I'm heartbroken because I didn't see SGTG this weekend after all. (Office X-Mas Party) :-(

Something to look forward to this weekend! I guess Captain Morgan and Coke will have to do the trick until then....

I want to see this movie so much. And not just because his screen-name is 'Julie-an! ;-)
When this movie was first mentioned, you refered to it a few times as 'the one you were the *least* looking forward to (as opposed to Constantine & Thumbsucker), so if it made you all 'scatterbrainy' then it MUST be good.

::sigh::
You'll probably have it on dvd already when it hits the theatres here :-(
It's terribly frustrating to know that there's an ovulating-expirience on the Keanu-front out there, and I can't get it.

Wahhhooooo! Krixy - Just got a call from a friend saying "Hey, you like Keanu Reeves, right?" (uh, DUH!) I just got some tickets to the premiere at Mann's tonight - want to go with me? Uh DUUHHHHHHHHH!!!!! So, I've got 1 hour and 45 minutes to shower, change and get my ass down there. Reports from the front later!
Cheers! DD

Aieee! Have fun!
Take your camera!

hey indy, major coolness, hope you get some pics and have a great time.
I am really enjoying all the keanuness out and about lately, good articles, lovely pics and a leno this week as well. the univers is good ; )

Just got home from premiere. Funny stuff. Camera not needed, but mos def good stuff. Reports from the front include: [...] kcr was at premiere but kcr only went to premiere and not party (as of 11:30pm). jack was at party holding court. diane showed up late in the night, wearing gloves. does she have ocd or add or ???. why the gloves???favreau was there as was that blonde girl from friends. i'll try to write more later. cheers, everyone!

YOu must have missed him at the after party, I read at an agency pic site where he was at a particular restuarant for the "afrer party" Maybe he slipped in and out quickly.

it's possible that i missed him. i actually took my time getting to the party and left at 11:30, so he could have gone there before i got there or after i left. it was a good time, regardless!

it's possible that i missed him. i actually took my time getting to the party and left at 11:30/12am, so he could have gone there before i got there or after i left. it is weird though. i saw his mom, sister and nonah gaye (and some unidentified frizzy haired guy) sitting at the "Reserved for Reeves" table for a LONG while and then they left, right before we did. maybe he was there early? it was a good time, regardless!

So what gives with Diane Keaton and the gloves? I see her wearing black leather gloves in all her interviews.

Posted by: liz on December 15, 2003 01:24 PM
What's on your mind?.....
(new here? please read this before commenting)
Remember, this is a fan site.
Keanu Reeves is in no way connnected to this website.
Please do not make a comment thinking he will read it.
Comments are for discussion with other fans.
Thank you.