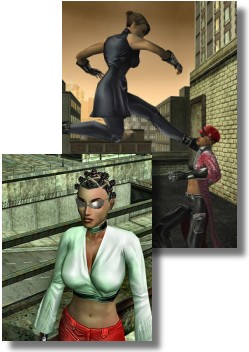 Thanks to Mikey2 for the link to The Matrix Online, the online role playing game based on the world of The Matrix due to be released next year. Looking at the screenshots it seems either they expect a lot of women to be playing, or maybe a lot of teenage gamers just want to see what it's like to kick someone in the neck while having really big boobs.

And speaking of boobs, Pam Anderson and Jenna Jameson are scheduled to appear on Spike TV's Video Game awards tonight, but I don't see Keanu's name there anywhere.

You can tape or TiVO it if you think he might be on, but I think I would have felt a surge of sexy if he'd been in Vegas on Tuesday.

You might be surprised how many female gamers there are...
But there ARE also some guys who enjoy having boobs in-game. You just never can tell. :)

I'll be sure to post my full review of the game once it comes out, because you can bet your ass I'll be playing.

About the game: I would assume as humans the gamers would most likely want to "idealize" their residual self images....
About the VGA: I didn't see Keanu in what I watched of the show though Enter the Matrix did win Best Game Based on a Movie :D (and then P.O.D. played a song right after to kinda go with the game's win or something..)
On another note: I found the awards show to be optimal for people with short attention spans...

Haha!! Yeah thats why Pamela Lee was on it! Im glad Matirx won, I have the game it is nice! I have it for Xbox. Well, Im glad I missed it then, if Keanu wasnt on it, its not worth watching. It sounded annoying anyway from what I read.

Ehm... *ALERT-ALERT*, this is a security warning to all Keanugolians!

Krix, I think they are using your site again to harvest mail-adresses, because I recieved an email from 'Keanu' *himself* today...
(Wahey! ;-) Good morning to you too honey!)

Anyway, the sender name was Keanu, and the subject was 'a funny website'.
It had a large attachment, which no doubt contained a virus or something.
Of course I deleted it without reading/opening anything, but because of the subject, someone might think that it comes from Keanuvision, & open it with all disastrous results that could come from it... So however gets it too, be careful!

PS: Ehm, & Reeves-honey, if it really was from you, I'm sorry for deleting it ;-)
But I already have plans for the weekend anyway, so it wouldn't have worked either way ;-D

Gee, I only get them from "Microsoft" advising me to "run this patch immediately" which since I have a Mac is mighty amusing...

Yeah, I'm just waiting for the day when I get an email from Mr. Technophobe Reeves.. ;)

Did it come from a keanuvision.com address, Julie?

I don't know!
My inbox only shows the 'sendername' which was 'Keanu'. In order to see the whole adress, I had to either open it, or use the 'block' option, but I was so angry about it, that I didn't block & just clicked 'delete' instantly. The mail itself was over 200 kb. It just really annoyed me, because some fans might actually think it's related, especially since *he* mentioned the funny website (=Krix), and open it. Usually when it's spam you can easily tell, because the sendername might be something like dave73349dhj3 or whatever, so I felt as if they are using his name to hack into innocent fan's computers... *bastards*

On a lighter note, I *do* have to say that seeing the name 'Keanu' in my inbox as if he's some sort of casual mailbuddy of mine was a nice experience ;-D

Posted by: Julie! on December 5, 2003 03:14 PM
What's on your mind?.....
(new here? please read this before commenting)
Remember, this is a fan site.
Keanu Reeves is in no way connnected to this website.
Please do not make a comment thinking he will read it.
Comments are for discussion with other fans.
Thank you.