Artist and Author on Constantine 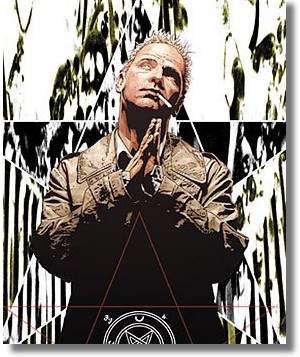 Hero Realm recently spoke to artist Tim Bradstreet about his work. You can read the whole interview here. (via SHH)

I have to say that I love his Hellblazer cover work and would probably buy prints of some of my favorites if I had the wall space.

Here's what Tim had to say about Constantine:

Bradstreet: Hmm. I have to be honest and say that when I first heard the rumor, there was also buzz to the fact that Guy Ritchie would direct. My thought's were, if Ritchie is directing I don't care who they get to star in it cause it should be good. With Ritchie helming, maybe they would move the storyline out of the states and back to the UK where it belongs. Then I heard that Ritchie wasn't in but Keanu was. I don't hate Keanu, it's better than having Arnold attached. And if they are going to build this film around the star it makes sense to Americanize the character given the fact that I just can't see Keanu pulling off a Liverpool accent.

I will reserve final judgment until I see the film. Keanu may just pull it off. The thing I'm most upset about is the fact that they've taken the character out of the UK. London is just as important to Hellblazer as John Constantine is. Fans are already alienated from this production because of that alone. Where is the benefit of alienating your core audience? Apparently, they don't believe that the 14,000 or so people who read it monthly are very important in the scheme of things. But that's Hollywood. Take everything that is essential to the character and change it to fit the profile of the popcorn industry. All that matters is that Keanu does his job and brings in his core audience. That's how the bean counters look at it. It really sucks that if they wanted to stay true to the book it would probably hurt the box office. American audiences just don't want to pay to see a British chap con people and use magic (I'm assuming). Although I would have definitely plunked down my cash to have seen it. Now if I was casting that film I'd have cast Paul Bettany as Constantine. That would have made my day. But Paul Bettany is not proven box office and this industry is all about profit. Too bad really. Now, bitching aside I really hope that director Francis Lawrence and his hard working crew are passionate about the project and deliver a film that makes me eat my words. I wish them all the best of luck. And don't count out Keanu yet. I remember a certain comedic actor who donned the cape and cowl of a certain Bat Man a while back. Fans raised holy Hell when that was announced and then quickly changed their collective minds when they saw the film. If the cast and crew of Constantine manage to create a work that is a cut above the usual comic book to film adaptations, then the jeers will turn to cheers.

Tim posted this portion of the interview over at the Straight to Hell forums a couple weeks ago, so you can read that discussion as well.

Tim isn't the only person close to the Hellblazer property that has spoken about the movie, here's a bit from a recent Interview with Hellblazer Author, Mike Carey:


Given that you are delving into the worlds of movies with Frost Flowers have you resigned yourself to the fact that the movie Constantine more than likely will be a far different person than the Vertigo incarnation? Or is that not something you're even going to bother considering?

MC: I went through the same agonies as every other long-term Hellblazer fan when the project was announced, and then when the rumours started to surface - about the Hellblazermobile, and his sidekick being a feisty lady cop and all that stuff. But from what I hear of the actual storyline, it sounds interesting - and Keanu certainly looks the part in the publicity stills. I'm keeping an open mind. Obviously it's not going to be the comic brought to life - it's going to be a separate entity, with its own look and feel. it's best to regard it in that light - maybe it's an "Elseworlds" tale of Constantine (I think that could be an Ade Brown insight that I've nicked).

It's nice that these guys at least are trying to keep an open mind.

I agree. We won't really know until our bum is on the seat watching it...

Love that Gesture. It fits Keanu perfectly.
In fact, I had planned a Theme over at AKC of that simple and thankful gesture of his.

thanks for the Constantine updates,krix..i love reading about it..and i agree,the artwork kicks butt!!

I believe that Keanu will do the angst of John justice and hopefully the ireverence..all the while looking devilish and droolworthy..

Who is Paul Bettany? I'm glad they are keeping an open mind. Keanu's performance will bring them around.

Maybe Constantine will be a franchise like Batman and various actors will play the part.
But as of now, Keanu is playing him and I honestly think that with a relatively new director and a non-mainstream property that the only way that this movie was going to be made was to have a star attached like Keanu.

He may not be blonde or british, but they're lucky to have him.

I finally saw the comics that Funk posted!!! :-)
But they were nowhere near as 'grim' and 'dark' as I imagined they would be after reading all the hoo-ha about it! If THIS is supposed to be *too* hellish for the 'normal' movie-audience, then I guess I have to re-adjust my views on what's shocking and what's not.

yes, Paul Bettany would make a wonderful Constantine, if they were trying to keep it pure. he has such an awesome screen presence, in a bizarre and quirky sort of way. but keanu will be great in his own way, no doubt.

Hello Julie and Pansy! Cheers for taking the time out to look at the comic. Do pop by the Straight to Hell forums again, if only to talk about The Princess Bride. :D

I have to say that Mike made a good point about Michael Keaton as Batman. I'm genuinely intrigued to see how this will turn out.

Posted by: James (or Funk, but I'm trying to get rid of that one now :D) on December 6, 2003 02:52 AM
What's on your mind?.....
(new here? please read this before commenting)
Remember, this is a fan site.
Keanu Reeves is in no way connnected to this website.
Please do not make a comment thinking he will read it.
Comments are for discussion with other fans.
Thank you.