Whee! Seattle rawked. I LOVE Eric and had the best time.
I'm going to have major vivace withdrawals tomorrow. We did SO MUCH!

Neo had fun too. 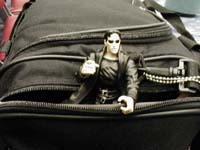 He kept me distracted doing DeNiro impressions ("You talkin' to me?") while I waited for the plane. 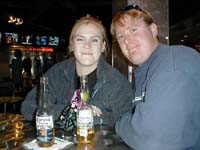 Neo also was happy to pose with random strangers (Hi Shelly and Nick!) in the airport bar. You'll notice they were smart and did not get the fifteen dollar cocktail (Which was good, but the buzz calming attributes did not last the flight). 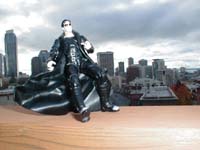 Eric lives in this great loft apartment with roof access. Neo re-enacted the original rooftop scene. Of course, Wee Neo is...well, wee, so I declined to dangle from a rope and let him pull me back up; Lovely view of downtown, though. 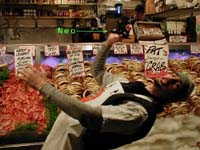 We went to Pike Place. The Real World Seattle (Rebecca's season) house was nearby, but we didn't bother to go there.
The guy at Pike Place Fish was happy to pose with The One. He even showed us how to dodge fish. 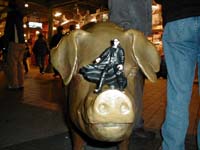 I have no idea whose ass that is, but here's Neo on the snout of the famous Pike Place pig. 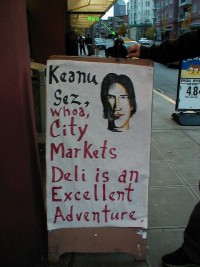 Hee. How funny is this? It's like they knew I was coming to town. How could I not shop there? 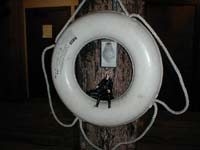 We went to the marina at night. The place was deserted and kind of spooky. I half expected the body of David Allen Griffin to pop out of the water at any moment. 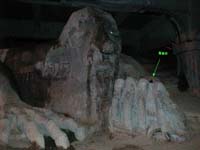 We also saw the famous Fremont Troll. He's the opposite of wee. Neo was unafraid. 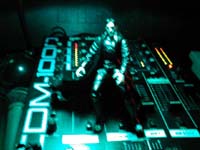 Late night, MC One busts a move in the DJ booth of the Club. Shake it like a polaroid baby. 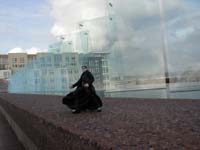 More sightseeing, we went to the Tacoma Museum of Glass, which was sort of dull except for the glass blowing demo. I kept Neo in my bag for that, for fear he'd think the glory hole was The Source. We did cross the Chihuly Bridge of Glass, which isn't actually made of glass but is pretty nonetheless. 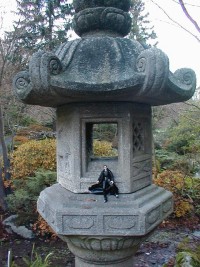 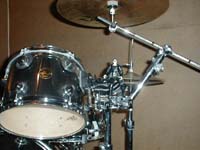 Rawk! Neo was too wee to play the drums at Eric's rehearsal space. We did do something there, though....but that's a suprise for later. 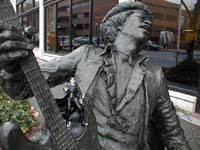 Neo hung with Jimi on Broadway.
Speaking of Jimi, we also went to EMP, the Experience Music Project and saw all kinds of Seattle music memorabilia including handritten lyrics by Hendrix and Kurt Cobain. We also drove by the house Ann and Nancy Wilson grew up in and by Kurt's house on the way to the Japanese Garden. That was a little creepy. 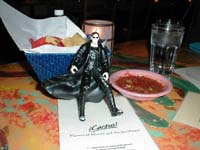 We ate out nearly every night, and the food was amazing. Last night, Neo enjoyed some chips and salsa at ¡Cactus!
If you ever go there, have the cowgirl brownie for dessert. It's orgasmic. 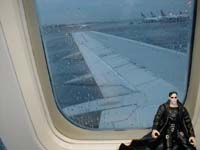 Getting up at 6am to be at the airport this morning was NO FUN AT ALL.
And we were both very sad to leave.

Wee Neo travels well, though. I need to be a bit bolder about getting people to pose with him, I think. Which means I need to take more trips!

But it's good to be home for now.

I am a Washingtonian - I live in Redmond just a few blocks from Microsoft. I am so glad you had a great time. I love your taking pictures of Wee Neo with the famous sights.

Do so have people pose with him - I think that would be fun. I like looking at your website - it entertains me.

Hey!! Krix loved the pics! sounds like you had a blast!!!! I just started a blog myself..im new at it..so any advice will help! :) Of course it features Keanu too!! And me..okay again I love your site and enjoy reading your entries! :)

Glad you're back! Some mighty strange coincidences in those Seattle pictures though--and yes, definitely get more folks to pose with wee Neo, I'm sure they will love it!

Welcome back, Krix!
Enjoyed "Krix and Neo's Excellent Adventure" and the Anthrax song.

Thanks for the slides...glad ya had fun.

Great pics! Looks like you had lots of fun on your adventure! It makes me realize that I need to travel more!! And yes I also have to explain to both my Neo dolls sitting on my desk why "they never get to go anywhere". I guess I'll will have to limit the amount of time they look at the computer! LOL

Ha! Imagine how jealous Dojo is going to be that his mate got to go and he didn't! ;)

Welcome back krix! Love the adventures! Glad you had fun and are safely back with us. :)

Where are pix of krix in the Seattle mix?

NO krixpix because I am the opposite of photogenic.

I have a or two krixpix ;P

Fantastic idea Krix, Loved the pics & seeing Seattle. I've never been to America & now Im unable to travel because of a spinal operation that whent wrong. ( I know how Keanu felt after his, mine was lower in the spine.) I would dearly love to see more of Wee Neo traveling all over. If he would like to come to Australia you could send him down to me. My family and I would be delighted to have him as our guest. We could show him the sights of Newcastle and further up the coast, and take lots of pic's. My daughter said she would even take him to school. LOL Rhy.

Order him here for a trip for Brazil, he will be well coming! ! !
We will take care very well of him. . .

Posted by: Ellen Reeves on March 5, 2004 10:27 AM
What's on your mind?.....
(new here? please read this before commenting)
Remember, this is a fan site.
Keanu Reeves is in no way connnected to this website.
Please do not make a comment thinking he will read it.
Comments are for discussion with other fans.
Thank you.