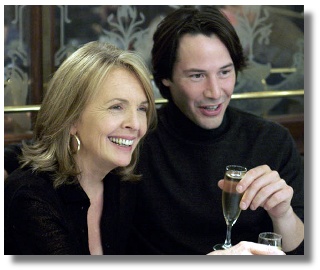 "WENT to see the full version of the coming Jack Nicholson/Diane Keaton comedy "Something's Gotta Give" (I'd seen a snippet a few weeks back and loved it.) Well, this Nancy Meyers' movie is going to be huge precisely because, in some respects, it mirrors Jack's real life (dating very young women) and it more than proves that middle-aged women, Diane Keaton for instance, still have "a dance in the old dame yet." (She is simply divine; no wonder Warren Beatty and Woody Allen and many another guy found - and find - her so wonderful.) I also loved Keanu Reeves in this movie - here blessedly removed from his inscrutable "Matrix" persona, which certainly doesn't tap his talents. And I wish the film had shown us more of the great Frances McDormand.

If I say "Something's Gotta Give" could use some judicious cutting near the end, that's just because I'm a fuddy-duddy who thinks most "entertainments" are too long. But this one will tickle you."

Also, Coming Soon has a new trailer up (choose 'B') that has some choice shots of our dream doctor. Thanks to Club-K, who already have some stills in their gallery

Thank you, Liz! Not just for new praise but for recognizing his overall talent and the fact that Neo IS A ROLE.

Gracias, krix, for sharing this. I'm countin' the days.

Damn, but I can't wait! I love when he does comedic roles - He always looks like he's having so much fun.

I prefer to look at it as he's done such a wonderful job bringing these characters to life that that some people think that he is the people that he plays.

That sweater does look great on him. I think it accentuates his nicely chiseled jaw line (which I seem to have a thing about, but that's a whole other story!). This morning some DJ's from a local radio station were doing their entertainment segment and they were talking about why would Keanu take a supporting role in a movie like this. I won't repeat what their answers were, I'm sure you could imagine what they said. I should have picked up the phone and set them straight, but I didn't (I am wimp, what can I say). But the answer is, because he chose to. He saw a good script and a wonderful opportunity to work with some great actors, so he gladly accepted the role. And now it is good to hear some positive reinforcement for what his fans have known all along, he is very talented!!

I am actually looking fwd to this film. I know he is not the main character and all but I love to see him happy and smiling and he glows when he's happy. I need to see that in him. He has just looked so sullen lately.

I lurve this pic! My imaginary dream date...dinner, that's all I ask..really. *le sigh* Nice comments by Liz Smith, I'm so looking forward to this--2 hours of Keanu smiles, I hope!
thanks for sharing!

My newly found love for Liz Smith has me all tingly - I'm a tad concerned here. ;)

Some people do not understand why an actor would take a job because of the role and/or the opportunity to work with screen legends. It's not about the billing or the pay check for Keanu and never has been. I'm guessing those DJs couldn't comprehend that.

-ditto of everybody above. I can't wait to see that beautiful smile and hear that sexy laugh. Yep, I'm counting the days....

I'm so looking forward to this movie. Keanu is smart to change up his roles -- from Neo-mania to a supporting romantic/comedic role. Smart, smart choices.

Ack! Small-penissed little *bastards* with chiseled jaw-line envy!
If I were you, I'd bomb that local radiostation right now!!!

Ehm... But maybe that's because according to the test in the entry above, I'm Jack from Speed. I think it's because I picked *BOOM* as my favorite word :-)

Julie! according to the test I'm Paul Sutton from A Walk in the Clouds, the sweet & romantic Keanu, so it just wouldn't be in my nature to go & bomb a radio station. But on the other hand I could give you the address and just let nature take its course! LOL

I'm Johnny Mnemonic Keanu. Now how the hell did that happen? Doesn't matter, this Johnny was Heller Hot too.

I'm realllly looking forward to this movie. It will be wonderful to see Keanu do a comedy again. And he's smiling a lot in the trailers for SSG, makes me feel all swoony.

Yeah, what Julie said!!! I'm hoping SOOOOOO badly that he just blows people away with this small role. It's *impossible* for him to do a poor acting job portraying a charming character...it's who he is. ;)

YUMMY!!! Can't wait to see SGG! Others are just now realizing what we've known all along!!

YEEEEEEEEEEEeeeeeeeeessssssssssssssss, that is the clip, thanks for the line, whew I cannot wait.
shiver
quiver


Posted by: tess on November 20, 2003 07:18 PM
What's on your mind?.....
(new here? please read this before commenting)
Remember, this is a fan site.
Keanu Reeves is in no way connnected to this website.
Please do not make a comment thinking he will read it.
Comments are for discussion with other fans.
Thank you.