Making sense of The Matrix 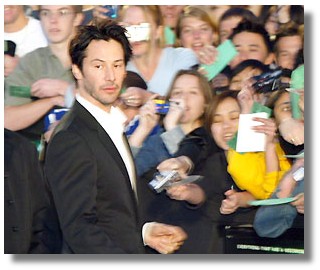 Keanu Reeves doesn't own a computer and has no plans to acquire one. "I don't use the internet, I don't send email, I don't have a secret identity," the star of the Matrix trilogy says. "You don't have to be a computer geek to be interested in the subjects these movies raise."

Still, he says, fans who love the movies and want to talk bytes find it odd - and there are many fans: after the first Matrix film grossed $US171 million, the second instalment, Matrix Reloaded, pulled in $US735 million.

What's even stranger, though, is the black-curtained room inside a Warner Bros sound stage in which we're sitting to discuss part 3, Matrix Revolutions. Reeves, too, is dressed head to toe in black and, despite the gloom, wearing dark glasses.

"Maybe I'm having a hard time letting go," he says of the Neo-esque attire.

"I lived and breathed these films for three years.

He's tired because he's in the middle of making his next film, called Constantine, in which he plays a supernatural detective.

His all-black attire and some unflattering overhead lighting make him look pasty. Coiling and uncoiling his fingers is about as animated as he gets.

The Matrix creators, brothers Andy and Larry Wachowski, are notoriously press-shy so the burden of plugging their movie falls to the actors.

"They made it clear from the get-go that this isn't their thing," Reeves says.

"I'm not saying that it's mine. But this has been a pretty life-altering experience for me, these movies, so if I can back them up that's fine. I'm cool with it."

...Continue reading "Making Sense of The Matrix at TheAge.com.au

Comments
What's on your mind?.....
(new here? please read this before commenting)
Remember, this is a fan site.
Keanu Reeves is in no way connnected to this website.
Please do not make a comment thinking he will read it.
Comments are for discussion with other fans.
Thank you.