A few thoughts, I won't vouch for coherency 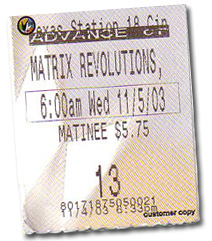 Don't click if you haven't seen Revolutions yet.
This goes for the comments link as well, as it will show the whole entry.

OK, of course the whole thing needs to be watched again. Here's a few things I can remember wanting to comment on:

Really, so much more. But that's all I can wrap my mind around right now.

I can't wait to see it again tonight.

I would have some witty comment re: Revolutions, if my mind weren't putty from being up since 4 AM.

And here I thought I was being so clever adding [/delurk] and [lurk] tags to my post. Too bad it reads HTML.

Beeb! How the hell are you?

okokokokok, just got home from seeing it AGAIN. almost called you again, too, but i didn't think our second viewing would be quite as synchronized as the first one... my favorite line of the moment? Trinity: "I don't have time for this bullshit." she so fucking rocks it's simply unspeakable. and yes, i still want to BE her, even though... i mean, what better way to, well, you know. dammit, i'm babbling now, but it just does that to you. oh yeah, and Smith: "Is it over?" now i'm off to watch TM and possibly Reloaded, if i can stay awake that long tonight...

Here in Germany some critics said that this movie isn't worth going to cinema - please don't believe them!

IT'S JUST INCREDIBLE (I can't think of any words to describe my feelings about this movie in english).

And krix I needed tissues, too!

I hear Keanu doesn't have much screen time in this one? Now that's sad. ;)
Can't wait to see this on Saturday.

Krix! I'm doing alright. It's been one hell of a crazy year. What about yourself?

On topic: did Revolutions feel like it could have been a classic war film (save for the giant robots) to anyone else?

I loved it too, stunned and quiet all day, went again right after work, I am so impressed with so much I don't even know where to start. Loved Jada as well in this one, she was awesome. The Wachowski's are fucking geniuses! Talk to you later.

Totally agree with you, krix, about the blue sky. My favorite scene, too. I've seen the movie twice today and have just gotten chills and puddled up both times she sees it. It just makes me so sad that Neo is unable to share that joy with her, but then again he can "see" more than her.

God, I love this movie. Screw all the "critics" who don't like it. If you are a fan of this series of movies, I think it's impossible to NOT appreciate the ending. It is **heartbreaking**, but appropriate. I think this movie is exactly what the other two have led up to...the war between the machines and the humans, and the salvation of Zion. Beauty, just beauty. *sniff*

Loved that it answered some questions and raised more. Love the way they handled the Oracle issue. REALLY loved all the strong women in this film. Found myself wanting to cheer at several points, especially with the "Damn, this woman can drive" line.

Krix, I felt the same way...this was it. No more Matrix movies to look forward to, no more Neo, Trinity...I was kind of sad after.

I went to see it at 6am in IMAX...with about 380 other people (sold out show.) It was spectacular, especially the battle with the sentinels! I wanted to see it again right after, but I didn't. I felt so tired, drained and it wasn't because of my lack of sleep either. I just wished I had gone to see it with someone (hubby stayed home to take the kids to school) because I wanted to talk about it...talk about the questions that I still had! I'll have to do the trilogy thing this weekend and totally immerse myself in it!

Saw it. Blogged about it. Want to see it several times more (but am scraping for money). REALLY wish I could go see it at IMAX. :/

Too many favorite lines to count...so I'll just say "[This ship's] got a FAT ASS!"

I really don't think this is the last time we've seen Neo, and I doubt this truly was Trinity's last gasp either. There is a Matrix MMORPG coming out "soon" (Massively-Multiplayer Online Role Playing Game), and I'm sure they'll figure in that.

Also, who knows what the future may bring for the Matrix franchise? While true that everything that has a beginning, has an end, it is also true that endings bring about new beginnings...

Just got home from the movies and all I can get out right now is OH MY GOD. Going to see it again this weekend at IMAX.

My God! I loved this movie so much...and cried a lot..i can't wait for it to come out on DVD. I bet it will sell faster than Reloaded. I'm also another that wishes to see it in Imax...but i don't think i'll be able to..

All I can muster is WOW!!!!! Those squiddies were AWESOME!!

Can't wait to see it again.

And Krix, the scene with Trinity got me too. *sigh*

So worth the wait.

waaaaaahhh! hi y'all, back from Berlin, still in London..OMG, my mind has not stopped racing since I saw this--Revolutions zero hour, then a triple-feature of M1, M2 and Revolutions again (all in English). The biggest movie screen (not Imax) I've ever seen, with a kick-ass sound system. They laid on soup and sandwiches in between the films and we got interviewed twice by German tv (I'm not sure if they used my comments, cause hey my German isn't that great...)

The black silk handkerchiefs I gave my friends came in very, very handy...*sob*

This film was *perfect* ... one of my friends couldn't stand the last few minutes but I thought it was beautiful and hey, I needed something after..after...*waaaaaaaah*

ahem. OK, getting a grip. Now I understand what krix's ex-boyfriend Joel was on about 'raising the bar -- there is no more bar'. I would rather say -- these films broke the mould. I simply cannot imagine another film that can touch them, there will not be another film anything like them. Of course, critics and the Academy will be completely unable to grasp this. A simple, old, old story, but told in a cinematically unmatched way. It's like opera, really. I love opera. You have a simple story, but told in an outrageous way that is completely sensual and emotional. That's what this film was for me. My mind will never lose some of the amazing visual images..

The acting was terrific and Trinity, and Niobe, and Smith, and ... Neo... Some shots of him of simply unearthly beauty..and some shots of unbearable heartbreak and pain. The shot over Smith's shoulder when he's driving them both into the ground? I totally lost it.. the images.. like Dore prints of the fall of Lucifer..

better stop, this is krix's world, I only live in it.. *hugs all, I need them after this*sob*

I walked out of the theater speechless. I couldn't even bring myself to post a comment until now. I didn't feel sad at the end, I felt like everything was right. The way it should be. I loved this movie, and nudel I loved your description best "a simple, old, old story, but told in a cinematically unmatched way".

I went in expecting to be kind of disappointed because of all the flack that I've heard the critics and the "real" Matrix fans were giving(whoever they are), but I walked out with so much respect for everyone involved in the making of this film. The writers for being so brilliant to even have thought it up, and especially to every single actor. I am sooooo proud to have been able to see this film. Keanu is so much more talanted than anyone ever gives him credit for, and hopefully....hopefully now that will all be cleared up. Kudos to all!! I can't wait to go see it again tonight!!

Posted by: anne on November 7, 2003 03:01 PM
What's on your mind?.....
(new here? please read this before commenting)
Remember, this is a fan site.
Keanu Reeves is in no way connnected to this website.
Please do not make a comment thinking he will read it.
Comments are for discussion with other fans.
Thank you.