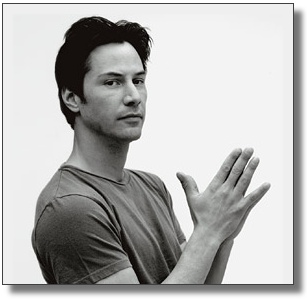 Well, Keanu is Entertainment Weekly's current cover boy and I didn't even realize it. I hate being out of the loop.

Here's and excerpt from the article, "His Excellent-cy" by Scott Brown:


Keanu Reeves is 39 years old and through making apologies. In younger days, he told interviewers he was a ''meathead,'' sensing their dim opinions of him and meeting them head-on with bodacious self-effacement. (Call it the Ted Offensive.) But little of that old self-consciousness is in evidence now. The tics are still there, of course. He fidgets constantly, crossing and recrossing his legs, Gumby-ing his obscenely thick hair from side to side. Any query that comes across as even vaguely invasive is deflected with polite monosyllables, but one mention of Hamlet elicits an entire soliloquy (''If it be now, 'tis not to come. If it be not to come, it will be now.'') and a bardolater's joke about his all-black outfit. (''My inky cloak,'' he cracks.)

Reeves is famous for quoting Shakespeare at the drop of a hat, but you can see why Hamlet agrees with him: a regal yet mercurial soul, confounding our often low expectations. And confound Reeves has, every step of the way. With ''The Matrix Revolutions,'' he concludes a sci-fi trilogy that entranced audiences in 1999 and befuddled them in 2003, grossing nearly $1.2 billion worldwide along the way. Whether it will lure back those whose heads are still spinning from ''Reloaded'' is today's multimillion-dollar question; Reeves himself admits the second movie was ''dense'' and says that it ''benefits from a second viewing.''

But just when you were getting used to Keanu in that sleek-if-impractical black cassock (''superhero evening attire,'' he calls it), you'll have to readjust to him in ''Something's Gotta Give,'' a romantic comedy that positions Reeves -- a doctor in this one [note from krix...Dr. Julian? My pretend boyfriend for December] -- opposite Diane Keaton and Jack Nicholson (opening Dec. 12). Next he'll be seen as a New Age orthodontist in ''Thumbsucker.'' And after that...well, you can follow him into hell, or at least halfway. That's where his next big role -- hard-boiled ethereal middleman John Constantine, of the ''Hellblazer'' comic -- will strand him. Sensing a pattern here? Don't worry. Neither is anyone else.

Reeves' identity has always been a bit of a blur. He's your average bass-playing, beer-drinking motorcycle enthusiast who's only now getting comfortable with moonlighting as a tremendous celebrity. One thing is clear: He's no longer the guy who once said, ''I make excellent good short copy because I use words like 'excellent.'''

He smiles beatifically and offers no further insights. No doubt about it, the guy is downright mysterious. Of course, there is a competing theory.

''He's just sullen!'' laughs Alex Winter, the Bill to Reeves' Ted and a longtime friend. ''If someone thinks he's a mystery, it just probably means he doesn't like them very much.''

And I love this part..


Reeves' friends and associates have a tendency to defend his intellect even when no one's really attacking it. ''I learned my lesson the first time we played a game of chess,'' recalls Laurence Fishburne. ''We were living in Sydney [filming 'The Matrix'], and I thought we'd have a little game and I'd see how bright the motherf---er was. Beat my ass in 15 minutes and left.''

The whole article is in the November 7th issue of Entertainment Weekly, a continuation of this excerpt can be read by AOL members by going to keyword: EW.

BTW, if you are a subscriber to EW and haven't received your copy yet, you can also go to their site and read the entire article. Just give them your address or account number when prompted to do so.

Just wanted to pass this along for anyone who didn't know about it.

another article that's producing non-stop smiles.
I dig the calibre of this, and so many other, recent Kanu interviews ...
Kudos indeed to the heavens for acknowledging my pleas . . .
:)

Just when I was about to cancel my subscription to EW, they do this.
Well. They have won a reprieve. For now.
But I will be reading next year's "IT" and "Most powerful" lists carefully as well as their reviews of Mr. Reeves' upcoming work and there had better be good news there. *frown*

I grabbed this from the airport bookshop on the way out on Friday, even though there should be one in my mailbox when I get home...I let my eyes skip over the sidebars as I fear spoilers, and concentrated on the beauteous pics and very nice interview..and is this the one in which Keanu's final quote is a possible spoiler? or was that Arena? (where I also haven't read the sidebars or questions relating to Reloaded)..Anyway, so nice to read two good interviews in a row, even if I had to put up with "disappointing Reloaded" yet again. grrrrr...[did you know these keyboards have " and @ and # in the *wrong* places? ;)]
In Arena, they said Keanu had the "hearts of millions of women" which I thought was an exceptionally sweet way of putting it, for a trendy magazine.

Posted by: bakednudel on November 2, 2003 10:11 AM
What's on your mind?.....
(new here? please read this before commenting)
Remember, this is a fan site.
Keanu Reeves is in no way connnected to this website.
Please do not make a comment thinking he will read it.
Comments are for discussion with other fans.
Thank you.