Thanks T for this sweet story... 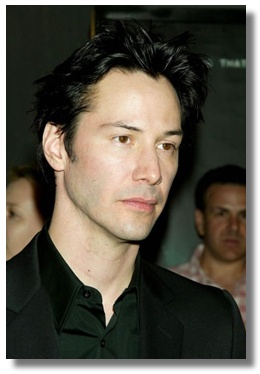 NEW YORK: Keanu Reeves has won brownie points with his homesick "Matrix Reloaded" co-star Nona Gaye by treating her to French lessons on the sets of the sci-fi film.

His gift not only helped the "Ali" actress feel more at home on the film's Sydney set but also took care of her boredom between scenes, says Channel4.com.

She says: "It took me seconds to realise he's a very kind and intelligent person. I remember when I first got to Australia I didn't have anything to do for a month and a half and everyone else was working.

"I just sat in my hotel room alone and was going crazy and Keanu asked me what I wanted to do because he saw I was bored.

"I said, 'I've always wanted to learn how to speak French,' and he said, 'oh, that's nice'. Then his assistant called back and said, 'we've set up six weeks at Berlitz (language school) for French lessons'.

"That's how kind he is. I've heard he's done similar things for other people, like buying lovely bottles of wine for the crew and the cast. He's a very generous person."

...comme d'habitude il est très aimable. I adore him for that!

Everytime I think it's impossible to love him more...something like *this* comes along. Whatta guy! OK, I don't mean "love" literally, because, you know, I've never met him. But you know what I mean, right?

That is really cool!
I wonder how I find a friend like that.

Posted by: phoenix IX on November 4, 2003 04:39 AM
What's on your mind?.....
(new here? please read this before commenting)
Remember, this is a fan site.
Keanu Reeves is in no way connnected to this website.
Please do not make a comment thinking he will read it.
Comments are for discussion with other fans.
Thank you.