Apparently, he couldn't find a lampshade 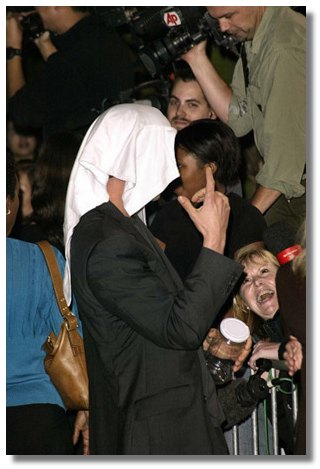 Ok, I'd really like to know what's going on here.

Anyone care to caption this?

I do believe he's signing, ROCK ON :) The look on the blonde woman's face is priceless. What a goofball he can be!

It was gift from a fan, but why he put it on his head we'll just have to attribute to his weirdness. He's back to the OLD boots, by the way. Not NEW old boots, the OLD old boots. At least they never betrayed him.

In the captions I have at a photo agency all it says is "Keanu gets a tshirt" so maybe a fan in the crowd gave it to him. What a clown! :)

The boots thing just gives me this "everything is right with the world" warm fuzzy feeling.

Maybe whoever gave it him wanted to see him in something besides a gray tee.

The towel must have come in the jar. I'd bet 5 lira that someone came with the towel in a jar, asked him to wipe himself with the towel and stick it in the jar so his essence can be preserved for all time. Maybe they asked for the pic to verify that the monumental moment is preserved as well. He decided to have a little fun with it.

Oh, ok. If you look at the picture in the previous entry, you can see someone holding the jar with the t-shirt still inside.
That's like the strangest gift ever.

And he put it on his head.

What a weirdo, I think I love him.

The shirt must have come in the jar. It wouldn't surprise me if someone asked him to put on the shirt for a photo and that was his natural response, LOL.

"It wouldn't surprise me if someone asked him to put on the shirt for a photo and that was his natural response, LOL."

Cute response! - I can so see that being the case...LOL!

All I can think of is the line from Four Weddings and a Funeral where Andi McDowell says (about her hat) 'Thanks, I bought it especially.'
Then I'm hearing him say 'This old thing?'

Yay! The Boots are Back! I so missed the boots!

Keanu says to himself: I can't believe they fell for that old "T-shirt in a jar trick!!!" Maybe next time I should try to pull a pair of boots out of a jar..... Naahh! The ones I got are just fine...

My husband came up with an interesting theory: Halloween costume boo-factor test-run. He'll be going as Casper of course!

Note to self:
Bring t-shirt in jar to next becky gig or premiere and wear oldest, most sentimental boots I own out of respect.

Yes another pict. thank you krix, you rock

Posted by: ***Danielle*** on October 23, 2003 04:55 PM
What's on your mind?.....
(new here? please read this before commenting)
Remember, this is a fan site.
Keanu Reeves is in no way connnected to this website.
Please do not make a comment thinking he will read it.
Comments are for discussion with other fans.
Thank you.