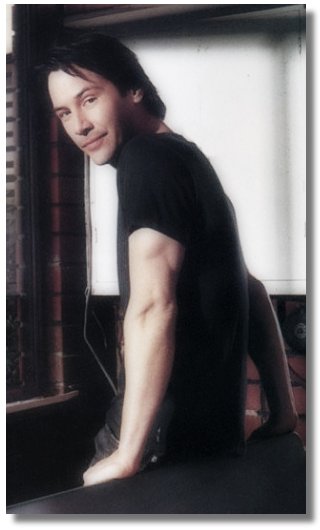 Is there any better dream than a Keanu dream?
I think not.

I got to run my fingers through his hair last night.

*stares off into space*

lusenka had a dream and shared it in the comments a couple days ago, what about you?

Had any Keanu dreams lately?

I never dream about Keanu, dammit!!!!
Except once, which is too painful to talk about...
Hm, OK, because it's you.

The only time I dreamed about him started of really nice. He was sitting on the couch in my living-room with me, and we had a really nice conversation. He was very cool, not arrogant at all and incredibly friendly. I remember thinking, even in my dream, that he was amazingly 'normal' and just very sweet in general.
THEN
My sister came in, and I realized that the reason he was so friendly to me, was because he was my BROTHER IN LAW!!!!

Julie, that's a horrible, horrible thing for your brain to inflict on you! I've only had one Keanu dream to date thus far (what's with me having the minor celebrity dreams? Hello Paul McCrane.)

There were a bunch of people in my backyard and suddenly someone else rushed back to tell us that Keanu had come to my house. So Keanu came out back and was signing autographs. He was getting closer and closer to me, and suddenly I was just too nervous to have him even NEAR me so I went inside (I'm a dumbass even in my dreams). A few minutes later I hear the door open, and whoa, it's Keanu. So he comes to stand beside me and I say "hi" and he just smiles that sweet/shy smile of his. Then I woke up! Stupid dreams cause I know there would have at least been some making out in that one.

I had a dream where I made out with Johnny Depp the next night. It was nice and all but it couldn't quite soothe the pain.

Julie, you crack me up!

I haven't had a dream about Keanu in forever. It's okay though 'cause when I have he was very aloof and very good at ignoring me. Who needs it? Now, daydreams, that I can do.

The last one I already shared with you all but I had a few others. One that comes to mind right now now is that I was in a bar playing pool( I only played pool once in my life) when Keanu approaches and says Hello. I remember my heart beating so fast but I collected myself and acted like he is not a big deal to me at all. Then he shook my hand and I simply melted !!! His hand was so warm and big and gentle and his dark eyes were staring right into mine that I could almost feel what he was feeling through that supernatural handshake.

For real, I never get excited in front of Big celebrities - I tried it on some, but never on Keanu. Still waiting for the opportunity.

my keanudreams, indeed all my dogstardreams seem to have dried up lately. woe is me.

Thank god, I'm not the only one in the 'disturbing dreams/no show' section :-D
I'm beginning to suspect that Krix and Lusenka are the only ones 'chosen' to recieve nightly vibes from 'the one' :-) Why can't my dreams be like that!!! Shoot, BAD brain! *slaps her own head*

You know what's even worse? A few years back, when the late show was still aired in my country, I used to watch that before I went to sleep, and I had THE most sensual sex-dream ever about...
David Letterman.
I woke up in a cold sweat, on the egde of a total and utter panic-attack. BAD, BAD brain!!! *slap again*

Haha, Julie. Funny men are sexy. I had a sex dream about Gene Wilder once.
It was in a bathtub and it was very VERY good.

And I've never actually had a sex dream about Keanu. Some have been intimate feeling, once or twice there was a kiss.
The second most romantic one was one where someone had taken my kittens from me and he went to get them back. I won't tell the first.

I love reading these. Funny what a tired mind will conjure up in a dream.

I actually did have a Keanu dream several nights ago. I dreamed I went to a becky concert and was treated to a private performance by the group. I got up on stage and walked over to Keanu. When I got in front of him I put my hand flat against the top of his bass and I could feel it reverberate all through me.

I sure hating waking up from that dream.

I love concert dreams. I try and book Dogstar into my subconcious as often as possible.

I've only ever had one dream of Keanu, I was riding with someone on a motorcycle and I had my arms raised and head thrown back like I was flying (read Titanic kate/leo scene). I could see the drivers eyes in the mirror, and I thought the driver was Keanu. But it wasn't him because the driver and I passed Keanu standing on the side of the road. Keanu watched me and this unknown man who had eyes remarkably like his pass him by. And he was smiling. A real, honest to God smile, not his fake photo smile. It was like he, as the observer, knew exactly how I felt, speeding down the highway along the coastline with the wind in my hair. Crazy, because I never ride without a helment. The dream felt so real, I could feel the sun on my skin and hear the sound of the bike, the sea, and the wind. I felt connected to everything around me. The sky, sun, wind, sea, and Keanu.

Posted by: w on September 10, 2003 09:41 PM
What's on your mind?.....
(new here? please read this before commenting)
Remember, this is a fan site.
Keanu Reeves is in no way connnected to this website.
Please do not make a comment thinking he will read it.
Comments are for discussion with other fans.
Thank you.