sometimes we have to make our own fun

So, Keanu totally blew it last night and missed out on meeting the loverly jozjozjoz and getting to hold a "Hi" sign for me. Maybe he'll get lucky next time.

However, though the miracle of digital photography we can experience just what it was like to be there.

In the parking lot outside the Orlando Jones Show.

Apparently, Joz and Professor Eric could hear the music coming right through the walls as they walked to the car. I embellished the photo so you can SEE the music, so clever I am!
See that red light, that means they're taping at that very moment. It's a moment captured!

Other guests on the show were some fancy motorcycle trick rider dudes (who are allowed to just park anywhere they want, it looks like). 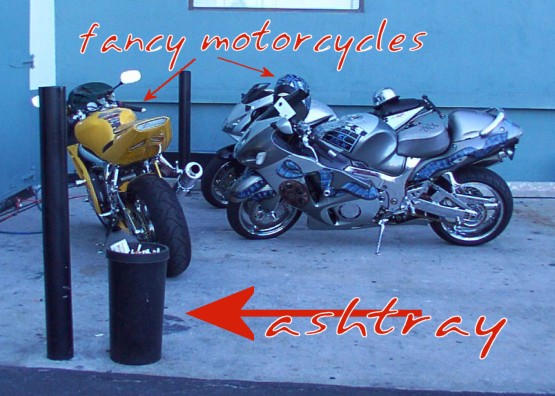 You KNOW that Keanu talked to the motorcycle guys about these very bikes!
And look, right there's an ashtray with the snuffed out butts of people who just may be inside watching becky play. Maybe even one of Keanu's half smoked Marlboros? Who knows? This is Hollywood, babies. Anything is possible.

But I was promised a "Hi" sign and Joz always comes through. This is the mysterious and wonderful Professor Eric, the man that started this whole escapade by spotting Keanu on Wednesday outside the Sharon Osbourne studio and calling Joz.

Hi yourself, Professor Eric! Thank you for thinking of me!!! And thank you, Joz!!!
It was just like I was really right nearby in the general area there! *smoooch*

So there you have it.
A brush with a brush with the parking lot of greatness.

I'm all tingly inside.

Shame it didn't happen. Would have been cool.

That is cool regardless of wether or not he was there. :)

Coolness, once removed, anyway! Thanks Joz & Eric, for an excellent effort.

Did anyone confiscate the ciggie butts? DNA, you know. I think I've been watching CSI too much.

It's sad that I knew it was going to be Suite 101 before I clicked on that picture.

I am so happy you got as much enjoyment out of this episode as you did. we had fun trying to get you these little presents. Did joz tell yyou about how i made fun of him and the people he was with by accident the day i saw him? have a great weekend...

Does anyone know when that show will air? It must not be live, I watched last night and Becky was not one of the guests.

leave it to joz to go above and beyond the call of duty, even if the ultimate goal was not reached.

she'll achieve that goal eventually with such determination! go joz!!

For anyone that's wondering, the Orlando show is supposed to air next thursday, 9/4 on FX.

Joz is crazy, but well all know that - that's why she's our friend. Besides, she is a good read ; )

We'll find the Keanu for Krix. It's hollywood you know?

Posted by: sharky the kid on August 31, 2003 05:59 PM
What's on your mind?.....
(new here? please read this before commenting)
Remember, this is a fan site.
Keanu Reeves is in no way connnected to this website.
Please do not make a comment thinking he will read it.
Comments are for discussion with other fans.
Thank you.