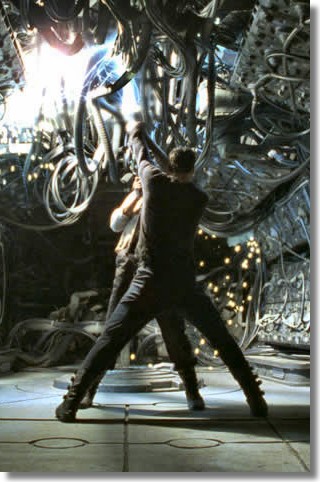 Today's pic is from the upcoming Matrix Revolutions, and it's of Neo going mano a mano (with a spark spewing whatsit) with someone, probably Bane.

Someone wrote to me earlier this week asking if I thought any of the screen grab AF shots were actually of his double. It had actually never occured to me that they would use doubles for shots of simply walking away. What kind of insane director would use a lesser ass when he has the gold standard of assery right there?

I have to say that after a year of selecting and posting Ass Friday pictures, I feel confident that I can tell the real thing or not. And I fully believe that every single Ass on every single Friday has belonged to Mr. Reeves.

This pic makes me question my own abilities.

He has doubled Keanu as Neo in all three of the Matrix films, and he's a hunkamuffin in his own right. A lot of the serious stunt work we are creaming over on screen in The Matrix movies is actually Chad and if anyone deserves to stand in and give Keanu a friday off, it's him.

Not that I'm sure that it is, but it might be.

Does Chad have the studly thighs? Don't recall.
Wide stance, aforementioned studly thighs;
the only clue in the pic above may be that the left foot isn't turned in as much as his most fetching pidgeon-toediness usually presents itself. On the other hand, perhaps he was consciously turning his foot outward, in order to present Neo in the most sturdy and indestructable manner. I vote he's The One, and not the other one.

It is a pickle, no doubt about it.
Instinct (and the curve of the studly thighs) tells me it's him, but my logic wonders if they would risk having him under that shower of sparks? Maybe they're CGI.

Of *course* it is Keanu, don't be silly. Chianti has pointed out all the right arguments (LOL!) and besides, he has a certain... Lankyness??? (Argl! I HATE it when I don't know the proper English word) Keanu is built a little disproportionate (please don't kill me for this, I love him too!!) meaning: His'top'-half is actually about half an inch too long to be symetrical. -I studied!!! ;-D I guess you could say that 'his ass is hanging too low' *snigger*
This is clearly shown in this pic, and therefore, it cannot be 'Chad'. The sparkles are fake too, it's a light-effect, I think. I hope these arguments will further solve this case for you ;-)

PS; Do you really think that Chad is 'studly'??? Ew, he looks like a college-boy!

...c'est pas faux, cette derrière! Can't be, why should they put pics online that don't show the real thing?

I'm guessing Chad is more like in his early thirties; IMO, studly. He also doubled for Mr. R. in The Replacements and was his stand-in in The Gift.

PS: Do you really think that Chad is 'hunkamuffin'??? Ew, he looks like a college-boy!

Anyone that can double for Keanu is a hunkamuffin.

Chad is giving me flashbacks of one of my worst ex-boyfriends. They look almost alike, and yes, *that* was a college-boy. Which explains it all, really ;-)

Now please excuse me while I'm off to deal with a suddenly unearthed teenage-trauma. Gosh, these pesky memories come to haunt you when you least expect them, eh? Thanx a bunch babe!

pardon Julie folks, she needs to take a moment...

-"Anyone that can double for Keanu is a hunkamuffin."
Oh, and I do take this back. As I'm scanning more trading cards I realize that the guy that doubled as Ted is just creepy.

But I still wouldn't kick Chad out of bed.

Hey, I simply can't wait to see The Revolutions now, especially will be looking for that particular sceen. Then we will all know for sure if it's really him or not.
My gut tells me it is Keanu and his butt on this picture, girl!

I googled Chad for pics and he is quite handsome. He also is quite learned in the martial arts. hmmm. If I'm ever pissed with KeKe... Chad as stand-in fantasy. I'll make a note.

I am rather preplexed here too, first, Julie, sorry for the flashback.....I think the dude is a babe, and those thighs in the pic.....they had keanu so thin for this movie, I am not convinced that this one is the one.

Sniff... Thanx Tess, and thanx Krix for the chocolate... *blows nose*
I feel better now.
Remember I wrote earlier (in the faux-friday context) that Keanu was an inch too long?
Well, THIS jerk was an inch too short.

i meant assery .... in the utmost *smiles* complementary way imaginable!...

When I saw that posterior shot - I was like "Whoa!" - Please, please, please let it be him looking so fine. God, and those thighs ...

it's keanu -- the butt and thighs are not that in shape, trust me on this one. IMO, too flabby.

Posted by: jessica on October 5, 2003 10:37 PM
What's on your mind?.....
(new here? please read this before commenting)
Remember, this is a fan site.
Keanu Reeves is in no way connnected to this website.
Please do not make a comment thinking he will read it.
Comments are for discussion with other fans.
Thank you.