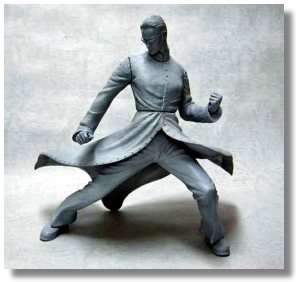 MatrixFans reports on another set of Matrix action figures, prototypes shown at Action-Figure.com.

I really like the look of the flow of the coat (if that makes any sense), I think his head seems a little small (might be the angle), and while it might not show up once the black paint is applied, there is a disturbing glimmer illusion of man-boobie going on.
Um.....ew.

I think a little more exaggeration of The One's package would be nice as well, but that's just me.

In other Matrix News, The Last Free City reports that there is a new Animatrix trailer to be found at the Official Site.
I'll be trying to download that once I go home tonight, hopefully I'll have better luck than with "Program". I never could get my sound to work on that one.

The one with him in just the shirt is pretty cool too. No sign of man-boobie.

OMG!!! Before I read your comment I was looking at it going, "Does Neo have boobies??" and then of course I read your man-boobie comment. Scary!! Oh man!! It's not Halloween! They shouldn't scare us like that!!! Eeeeek!

Me again! :) I hate to say it, but I think the Agent Smith one looks SUPER Cool (the hair, sunglasses, SHOES etc... Whoa!)! And if you look closely, he kind of looks like Bret (OMG!!)! (Or it could still be the affects of my sugar-high wearing off, I dunno?)! Does anyone else see it or is it just a figment of my OVER-active imagination??

Maybe they can relocate the man-boobieness to the crotchal area?

OMG. Chianti! I was thinking the VERY SAME THING!

Heh, whoops. That extra "r" is just sitting there like a third nipple, huh.

I'm not happy with my choice of "glimmer" either. I'll probably edit it later.

They got rid of the man-boobies...LOL

thank god.
The coat is better in the final. too.

Posted by: krix on August 8, 2003 12:55 PM
What's on your mind?.....
(new here? please read this before commenting)
Remember, this is a fan site.
Keanu Reeves is in no way connnected to this website.
Please do not make a comment thinking he will read it.
Comments are for discussion with other fans.
Thank you.