more on Paris, this time with a picture 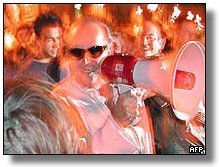 Actor Jack Nicholson voiced his support for striking French actors as they interrupted his film shoot on location in Paris.
Nicholson was filming on a bridge over the river Seine when protestors walked on to the set and refused to leave, police said.

Nicholson, in his trademark dark glasses, picked up a loudhailer to address the group and ask what the problem was.

Told that artists' rights were threatened, he said in broken French: "The struggle continues!"

After discussions with the protesters, the production crew decided to pack it in for the night, police said.
Nicholson is in the apparently un-named movie alongside Diane Keaton and Keanu Reeves.

The actors and other arts workers are protesting over government plans to change arts workers' unemployment benefits.

The dispute has already caused the cancellation of a string of events across the country.

France's three-week Avignon arts festival was abandoned and a sister event in nearby Aix-en-Provence has also been scrapped.

On Wednesday, Culture Minister Jean-Jacques Aillagon described the actors as "irresponsible" as the government vowed to press on with the benefit cuts.

It's from the page with the article.

It almost looks as if the Ke part was inserted.

No, I didnt mean *that.* Just looks like a bit o' fakery. Doesn't his hair look short?

I'm not arguing that he may not have been there - I believe he was; it's just a comment on this photo.

Kind of artsy-fartsy for a news story. IMO.

I think it was just someone who was there got a blurry digital photo and probably sold it to the news service and it got used because it was the only shot with Keanu in it as well.
A lot of digital photos come out with this "ghosty" double exposure effect when the subject is moving and you have a slower speed because of the low light.

Oh. I'm not used to these new-fangled piture takin machines.

Hee.
You are right though, it is a little arty for news.
Those French and their aesthetics ;)

I wish it were BIGGER!

I saw a bit of this on Access Hollywood tonight. Jack was trying to "speak French." LOL I didn't realize the crowd was so big??? That was A LOT of people!:OP As hard as I tried I couldn't see Keanu, but I did see the police in riot gear! Mon dieu!

Posted by: Natasha on July 10, 2003 09:21 PM
What's on your mind?.....
(new here? please read this before commenting)
Remember, this is a fan site.
Keanu Reeves is in no way connnected to this website.
Please do not make a comment thinking he will read it.
Comments are for discussion with other fans.
Thank you.