Try not to become a man of success,

but rather, try to become a man of value... 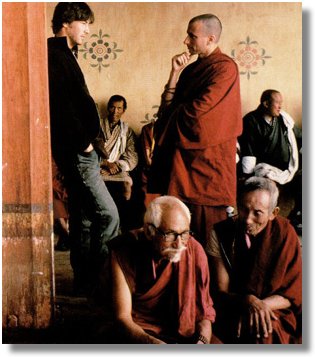 This picture and the quote by Albert Einstein were together in my mailbox today, thanks to Rhonda.

I'm up way too early for a Sunday, especially considering that I have late night debauchery planned with Lori O. tonight. Expect drunken voicemonkeys later.

There are walruses on my television, which reminds me, I have to go take Roi some whiskey for his toothache.

Hope everyone has a lovely Sunday.

Having a FANSTASTIC Sunday - now that my site will be back up!!

Have a great time with Lori!

Lovely photo - interesting how the monk appears to be seeking knowledge from Mr. Reeves...
wouldn't it have been enlightening (no pun or offense intended) to have eavesdropped on that exchange?
The quote is quite Keanuesque as well. Thanks so much for sharing, Rhonda and Krix.

PS (sorry I keep doing P-esses) but doesn't he look just about (exactly) like he does now (ten year later?) yummers.

oooohh! yeah... quite enlightening (among other things) ~ both pic and quote!

Great quote! I have been collecting quotes lately. I got one of of keanuweb (at least I think that's where it was from) that went something like, "The question is if you can live up to the best part of yourself everyday."

Posted by: Weezie on June 29, 2003 05:31 PM
What's on your mind?.....
(new here? please read this before commenting)
Remember, this is a fan site.
Keanu Reeves is in no way connnected to this website.
Please do not make a comment thinking he will read it.
Comments are for discussion with other fans.
Thank you.