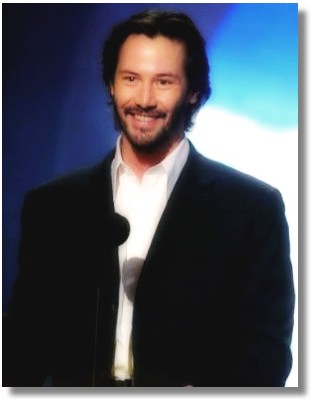 So the MTV page on the movie awards has a 20 photo slideshow, but no pictures of Keanu. Thankfully the POTD club had one today.

Update: Here's a blurb from Zap2it...


"Highlights of the show included Gollum's love/hate acceptance speech, which should win an award all by itself; Queen Latifah making out with Hollywood's favorite smoocher, Adrien Brody; and Keanu Reeves, who refused to say the word "whoa," making "MTV P.A." Andy Richter say it for him. Oh yeah, there was also Yoda's strange acceptance speech, which featured the wise one giving thanks to Steve Guttenberg, Vin Diesel and the Queen [Latifah] among many, many others."

ya know how sometimes his smile looks strained, like he's forcing a happy face? well, he looks genuinely happy in this pic. there is a light in his eyes. nice. :)

Don't feel too bad Krix, I remember a time when there was no MTV, and I'm not that old! LOL It really wasn't that long ago.......

Hey, I was a jr. in college when MTV went on the air. I can even remember that "album oriented rock" format. how scary is THAT??

I'm thinking I was about 16. I can only think of the video "Hey Mickie!" *GAG* being one of the first ones I saw. LOL

I wonder what WAS the very first video shown on MTV. I'm sure it's out there somewhere. LOL

I know this!
It was The Buggles' "Video Killed the Radio Star".

Hey, I still have a 6-hour videotape of vids from MTV. All kinds of vintage stuff, including Men Without Hats (always did like that name), Frank Zappa, various and sundry ridiculous 80s bands, etc. Great for breaking out the chocolate pretzels and the doobies and having a late-night laughathon. :D

It was all so primitive then. Now it's all high tech.

All this early MTV talk reminds me of none other than the first band known for their videos, Duran Duran. Krix have you written a follow-up to "Neo"? I'm sure we would all love to hear it!

Oooo, you may have inspired me, Lisa.


Posted by: krix on June 3, 2003 11:50 AM
What's on your mind?.....
(new here? please read this before commenting)
Remember, this is a fan site.
Keanu Reeves is in no way connnected to this website.
Please do not make a comment thinking he will read it.
Comments are for discussion with other fans.
Thank you.