If my car were like Keanu, it would be more beautiful because of its flaws....feh, I'm still calling the insurance company.

Funny thing happened on the way to pick up Roi for dinner last night...I got freaking rear-ended at a stop light. I'm fine and the damage is minimal, mostly just the imprints of the screws of the guy's license plate and a bit of a scrape, but since the Station Wagon is barely two months old, so it WILL be claimed and repaired. He also said that right before he kissed my bumper with his front end, he was looking at my license plate, and mentioned that he just saw Reloaded Tuesday night.
It's too bad I was thisclose to wrapping my fingers around his throat for hitting me, as we could have dated.

I think I will probably go see the movie again tonight. I've done a lot of reading the past few days, so it will be interesting to view it again with some new knowledge.

I know that the reactions around have been pretty mixed. You'll never see me say anything bad about this movie, the cast or the Wachowskis, though.

Like they need a fan griping and nitpicking when they've apparently got their hands full. What, with post-production on Revolutions and pissing off not only the Republicans, but the albino community as well.

Of course, Keanu has been handling the promo tour with class. 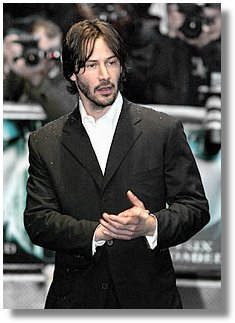 "Wearing a black suit and white shirt he withstood the pouring rain, walking from fan to fan to sign autographs and pose for photographs.

The star, who ploughed a lot of his own money into the film, spent 30 minutes rewarding those who had waited so long, and later said: 'I wish I could have stayed out longer.

'It's absolutely fantastic,' he continued. 'It's extraordinary.

'Some people have been really anxious for this film to come out and I just hope it lives up to their expectations.

'I've loved making the film and I just hope that it brings as much enjoyment to those who watch it.' "

It does baby, it so does.

Yeah! The site is still alive! :-)
I'm leaving work soon to see Reloaded again tonight (it's evening here) too! :-)
I'll pay close attention on how the twins are handled, maybe that way I can find some evil-SPAM-bastards busting tricks in it for you!
What I'm looking for most is the last shot, though. I thought the man in the end looked like a young, non-grey version of the architect...
I haven't seen anything written about that yet, but then again, I don't visit the discussion boards, except for the link Anne gave here a while ago. I just really want to see if my eyes played a trick on me or not.
I'm so excited! :-)

Shit man, I'm so sorry about your new car.
The guy who hit you, was distracted by the plates? I better watch out too, then.
But, was he cute? Not like that would excuse him.
There is only one man who could possibly make me say nothing if he hit my car, and that is sooo not going to happen....

He was cute. I think he was reading the 'I [heart] KEANU' plate frame, and that's why he mentioned Reloaded. Of course, if he knew Dogstar was the band, I'd have to marry him, slippery brake foot or not.

I'm dying to get out of this office and to the movies.

I feel rotten that I haven't seen either Matrix...

You've got to see the first one before this one.

if you're going to see the first one, look around, here in SF they had a midnight showing of it for two nights at the Clay. So look around and see if you can catch it on the big screen.

I gotta tell you, I resisted the first one for TWO years, thinking it would be too violent, too manipulative, too much for me. Everyone said I had to see it so I finally did. I detest manipulative movies that just push emotional buttons and I was SURE this movie was just another one of those. Then Trinity said "...it means the Matrix cannot tell you who you are." and I KNEW I was in good hands and just relaxed. I usually can't stand violence and bloodshed but even the death of Neo in the Heart O the City was completely watchable. the only scene that makes me flinch is near the beginning (so if you are sensitive like me, close your eyes right after Neo says "I Want My Phone Call" and don't open them again until the alarm clock goes off). This is when they put the bug in Neo and I can't watch it. I am sure I will close my eyes when Neo revives Trinity (no I haven't gone to see it yet, I am waiting for IMAX).

sorry about the car accident! hope you're doing ok!

I'm fine. It was an amazingly light tap, and if I didn't have a soft plastic bumper cover (and the car had not been new) I would have just shrugged it off.
As it is, it will be $139.23 parts and labor to replace, and the company that owns the truck is just going to write me a check.

yeah, definitely marry him if he knows Dogstar. that's what i'm doing with my Phill...only he doesn't know it yet, so shhh...

Hello, Karen.
I ran you comment through a translator to answer you.
I just wanted to agree that yes, Keanu is very talented and special and the way he lives his life is something I admire a great deal.

And I wanted to mention that I do not think that the Dogstar that Keanu plays with is the same one that sings that particular song, "I wish it would Rain". I belive it is another vocal band.

Posted by: krix on July 23, 2003 04:25 PM
What's on your mind?.....
(new here? please read this before commenting)
Remember, this is a fan site.
Keanu Reeves is in no way connnected to this website.
Please do not make a comment thinking he will read it.
Comments are for discussion with other fans.
Thank you.