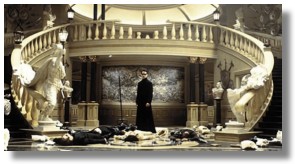 Audiences are plugging into "The Matrix Reloaded" in record numbers, powering the second chapter of the "Matrix" trilogy to unprecedented box office receipts. Making motion picture history, Warner Bros. Pictures' and Village Roadshow Pictures' blockbuster film earned $157.6 million in its first seven days of domestic release, setting a new record for the biggest opening week ever, and surpassing the $151.6 million grossed by previous record holder "Spider-Man" in its first seven days. "The Matrix Reloaded's" gross to date is now $158.2 million.
"Reloaded" also charted the fastest climb to $150 million in film history, hitting the mark on its sixth day of release and continuing to build momentum. "We are extremely proud of the success of `The Matrix Reloaded,'" said Dan Fellman, President of Domestic Distribution, Warner Bros. Pictures. "It is vastly gratifying when a film that we believe in so strongly is received by audiences with such unparalleled enthusiasm."

"We set the bar remarkably high for `Reloaded,'" said producer Joel Silver. "Our ultimate goal, made possible by the brilliant work of Larry and Andy Wachowski and our exceptional cast and crew, was to deliver an extraordinary film to the fans who have waited three years for the next chapter in the epic story of `The Matrix.' Their commitment has been unprecedented, and the film's success is a testament to that devotion."

there goes silver with that damn bar again... hee!

Posted by: lori on May 26, 2003 08:34 PM
What's on your mind?.....
(new here? please read this before commenting)
Remember, this is a fan site.
Keanu Reeves is in no way connnected to this website.
Please do not make a comment thinking he will read it.
Comments are for discussion with other fans.
Thank you.