Well, I didn't actually make it to another showing of Reloaded this weekend.
Not that they needed my nine bucks, as the box-office pretty much trounced everyone else (thanks to Anne for the boxofficemojo.com link).

Everyone I know has wanted to talk to me about this movie. I guess I'm the hometown "Keanu pundit" (tho I prefer "maven").

I love the conversations that start out "I hear it sucks."

Because then I get to argue why it doesn't and that "you're just an idiot".
That's always fun for me.

Because there is no 'suck' in this movie (except maybe in the ladies' room, heh). Sure, it's a little dense with ideas and maybe, just maybe it didn't live up to the hype (but does anything? ever?) and perhaps sometimes one can be a little distracted by the imagery and not be able to catch all the words but what's wrong with a film that makes you work a little bit?
And to those that complain that it was too hard to make sense of I have to remind that it's really just half a movie. A half of a movie that needs to be watched more than once or even twice. And that you need to pay attention, because every thing, every scene, every character has its purpose.
Granted, that in some cases the purpose might be to show off a little bit. I do think the burly brawl went on a smidge too long (and while I'm on the subject, while the virtual camera was impressive, certainly better than anything we have seen in motion pictures yet, I don't think we need to worry about virtual actors taking away jobs. Maybe it's because I'm so very tuned into Keanu's face and the way he moves that I didn't enjoy the effect as maybe I should have). But I don't agree that the Zion dance/ Neo and Trinity sex scene was gratuitous. I think they were very important to show the passion and love of human beings. To emphasize the flesh. I think that there was a lot to tell in this middle part of the story and it was done well with amazing attention to detail.
And it's in the details that you will find both the story and the genius that goes into telling it. 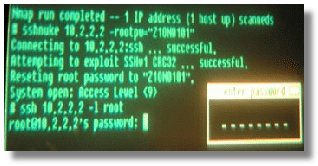 "We have all seen many movies like Hackers which pass off ridiculous 3D animated eye-candy scenes as hacking. So I was shocked to find that Trinity does it properly in The Matrix Reloaded. She whips out Nmap version 2.54BETA25, uses it to find a vulnerable SSH server, and then proceeds to exploit it using the SSH1 CRC32 exploit from 2001. Shame on them for being vulnerable. "

Thanks to Jen from Illusionaire for the info.

It's that kind of fine touch for which I adore this movie, and those involved with it.

After the second viewing, I even felt myself start to complain that as a whole there was something I was not quite happy about. But then if I broke it down into individual scenes, I have to say that each one was perfect. I think the reason that the whole film seems "off" is because it's unresolved and only after we see the third film, and complete the cycle from birth to life to death will we really appreciate Reloaded.

And at that point you might as well put a big bowl of water at the Wachowski's feet, because we will all be their bitches.

You didn't say how you wanted to take delivery on the tequila?

I don't think I will make it to OC in June. I'm not sure yet.
And actually, if you haven't bought tequila, don't.
After the worm thing, I'm pretty sure the smell of it will make me heave.

You want a prize, Julie? Because you can probably have one just for being you.

I shouldn't have read this because the NMAP thing is just the sort of film scene that I love to let piss me off. Everyone knows that even if you don't keep your ssh patch levels current, you disallow remote root logins. Honestly, it is a matter of putting a simple "N" after an equal sign. Amatuers.

BTW, I meant that the admins of the target machine were amatuers... its pretty cool that the filmmakers did their research.

Krix, thanks for posting your impressions - there were feelings about what I saw I haven't been able to define. Muddled thoughts ever since. "Burly-Brawlitis" if you will.

But you've hit on it - filmus interruptus. I've decided this is the real cause of my angst.

I must see it at least once more. Alone this time.

Re: gratuitous sex: Regarding Mr. Reeves, there is no such animal.

i agree with all of this, only I felt it flowed better the second time I saw it. And gratuitous sex? that scene was pretty tame compared to most, but it showed exactly what you said it showed -- real love between people. I know I felt it.

I remember hearing about the abrupt ending and saying that it was one spoiler I was glad to know. I think I would have been *really* pissed if I hadn't.

I think I need to see the movie alone as well.

Quote: "I think the reason that the whole film seems "off" is because it's unresolved and only after we see the third film, and complete the cycle from birth to life to death will we really appreciate Reloaded". After seeing Revolutions, all those nay-saying critics will piss in their boots as they apologize profusely.

i saw it twice this weekend. whoa. cool. happy.

Posted by: ratty on May 26, 2003 01:57 AM
What's on your mind?.....
(new here? please read this before commenting)
Remember, this is a fan site.
Keanu Reeves is in no way connnected to this website.
Please do not make a comment thinking he will read it.
Comments are for discussion with other fans.
Thank you.