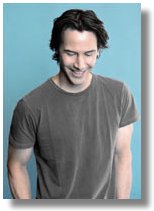 Keanu Reeves: Cool, man
'I'm a meathead. You've got smart people and you've got dumb people. I just happen to be dumb.' Yeah, whatever, as the Matrix generation might say. The man has barely put a foot wrong in a glittering Hollywood career and he commands a loyal following and $30m a movie. From another planet he may be, but dumb?
By David Thomson

The thing with Keanu Reeves is that he requires the very quality he offers to the world – a degree of acceptance that is rare in such neurotic times. Like the trouble he has with questions – I mean, don't you know how aggressive, how totally inappropriate questions can be?

Some people confronting Reeves have opted for the trite, cynical answer – that this handsome, deadpan guy is pulling their legs. But now, as Reeves comes close to 40 (as an age) and is pulling down a minimum of 30 (as in millions of dollars) for The Matrix Reloaded and The Matrix Revolution – and that is 30 up front, before the profit participation on these immense commercial enterprises – then I think it's time for us to look in the mirror and ask, "Who is the idiot then, dude?"

For it's not Keanu – or "cool air over the mountains" as he was named in Hawaiian – it's anyone who's ever doubted him. Truth to tell, I have to break the news – this after months of Hawaiian research – "Keanu" doesn't actually mean "cool air over the mountains". It means simply "the coolness" – and who needs anything more, when you can wear black leather and rimless granny shades, when you can fly and make love and utter runic inanities about existence that might look silly in interviews but send the teen Matrix fanatics into trance?

Isn't it clear? Keanu is not of woman born. He's something else. He's either a robot or a spirit. It's the only possible explanation for how he gets away with it. So it's some kind of androidism plus ... plus what? Well, as Keanu admitted on American television when pushed by the stooge interviewer Charlie Rose to explain the weird mixture of drab fashion, kung fu, Kahlil Gibran and aerobics in The Matrix: "Well man, I'm going to say it. I think it's love."

I think so too: it's robotics + love = our future. And I'm outta here.

I know. You can hurl the "facts" at me: that he was born in Beirut, Lebanon, his mother a showgirl and later a designer for Alice Cooper; his father a geologist who later served time on multiple drugs charges. The upbringing in Australia and Canada. Dropping out of high school at 17 to concentrate on surfing and ice hockey and the motorcycling. I don't care. I think he's the man who fell to earth. I mean, use the evidence of your own eyes. Look at The Matrix Reloaded and then look at Keanu in River's Edge (1986), in Bill & Ted's Excellent Adventure (1989), in My Own Private Idaho (1991), in Speed (1994), in The Devil's Advocate (1997). Is there really the slightest evidence that he has grown one minute older?

And then recollect that this is the man who said, "What would happen if you melted? You know, you never really hear this talked about much, but spontaneous combustion? It exists ... people burn from within. [This is true – I'm burning.] Sometimes they'll be in a wooden chair and the chair won't burn, but there'll be nothing left of the person. Except sometimes his teeth. Or the heart. No one speaks about this, but it's for real." I mean, is that a human being or a robot anxious about stray sparks?

Not that I mean to complain. If there's anything that a hundred years of movies with real people has taught us it is that those people are trouble. They forget their lines. They overeat. They do drugs. They have crises and other problems. Keanu has always been above problems. You don't have to direct him; you can't – he is nuance-free. The equipment is either on or off, which simplifies so much, especially if kids regard his being "on" as the equivalent of a water bed timed to rock 'n' roll.

There are problems, of course: put Keanu in costume – as with Dangerous Liaisons, Bram Stoker's Dracula and Much Ado About Nothing – and there is an obvious dissonance between what is often known as period, or literacy, and the coolness. So put him in the kind of situations that all kids now take for granted – like a city bus that can't drop below 50mph; or being a floating zombie that thinks computer generation is the international language of love. (Is there any phrase that moves us more than "You've got mail"?)

What I really like about Keanu and the coolness is that there's not a glimmer of threat to him. Yes, he can fly, fight off millions of replicants, and just be cool, but he's so gentle, so sweet, so passive. In part, it's the uninflected way of speaking that does it – don't you actually think about the kind of person it is who says: "You've got mail"? Suppose he said more. Suppose you sometimes saw his face in the screen. And then, one day, there he was, young, supple, cool, uncritical, and ready to service all your mad desires without so much as a gravel-sized piece of judgement or commentary. Face it: we all deserve a little Keanu in our lives.

And that's why the films made by the Wachowski brothers are so pregnant. I laugh (ha ha!, I go) when I hear the dumb commentators of the world surmising that The Matrix and its run-ons are the future of the movies. They are quite simply the future of everything. Come to think of it, are we really supposed to credit the Wachowski brothers for being real human beings – or just naughty twins, like bold and italic?

The readers of Empire magazine, in 1997, voted Keanu 23rd in the Top 100 Movie Stars of All Time, but since the readers of Empire believe that All Time began around 1980 (just like a weird computer program) I take that as somewhat churlish. Are we supposed to believe that thereare 22 people more beautiful, cool and lifelike than Keanu? That's the point – he is so extraordinarily life-like. Despite being Canadian. Is there anything more ordinary or charming than Keanu's smiling admission: "I'm a meathead. You've got smart people and you've got dumb people. I just happen to be dumb."

Maybe there will be a few losses along the way as dumb culture sets in. But I think 2,000 years of learning, literature and conversation have been ample proof that smart people, sooner or later, end up unhappy, antisocial and just difficult. Do we really enjoy that, or want it?

One of the greatest articles I've ever read.

i want that picture

Just curious, the 30M up front and the 15% on the back was for 2 movies rather than just reloaded correct? Because if i read that accurately, i feel he was under paid to an extent. Just curious :)

Yes, Jessica.
And he gave up all or part (I'm not sure on specifics) of his back-end points to the special effects team. He was definitely underpaid. But I don't think that it's that important to him.

That is one of the best articles I have read about "the Coolness". I just love him, it's all about love baby!

Posted by: Audy on October 3, 2003 07:29 PM
What's on your mind?.....
(new here? please read this before commenting)
Remember, this is a fan site.
Keanu Reeves is in no way connnected to this website.
Please do not make a comment thinking he will read it.
Comments are for discussion with other fans.
Thank you.