Where does the actor end and the code begin?
If you read the WIRED article*, you know about the groundbreaking processes and techniques that were used to create realistic CGI "clones" in order to create the no-boundries camera work in the fight sequences in the upcoming Matrix films.

Thanks to Wrygrass, who scanned and sent out an article from Popular Science magazine with a look at this:

*Warning: the below might shatter a bit of the mystique - read at your own risk. 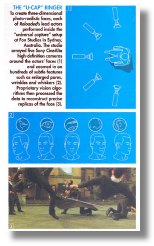 Popular Science May 2003
Science of Cinema
PIXEL-PERFECT DIGITAL CLONES ARE READY FOR THEIR CLOSE-UPS
Sit back while The Matrix Reloaded boots up the next generation of virtual filmmaking.

Perhaps the only thing more outlandish than the rumored $300 million budget fueling the wildly anticipated Matrix sequels, The Matrix Reloaded and The Matrix Revolutions, is the films' new jaw-dropping visual effects wizardry. When Reloaded opens in theaters on May 15, viewers will spy the most realistic computer-generated faces ever made, claims visual effects supervisor George Borshukov. His team at Esc Entertainment in Alameda, California, has spent the past three years designing digital mugs that precisely mimic the faces of Keanu Reeves, Carrie-Anne Moss and Hugo Weaving, the sequel's stars.

"Creating a believable synthetic face is the ultimate challenge in computer graphics," says Borshukov. That's because humans are trained from birth to make and recognize more than 10,000 complex facial expressions, most of them too subtle to be accurately simulated in standard computer-generated renderings.

To create photo-realistic digital copies of the actors' faces, Esc had to first invent an ultraprecise facial mapping technique, dubbed "universal capture." Unlike standard motion capture techniques, in which a camera records facial movements by tracking painted-on dots, universal capture uses five Sony CineAlta high-definition digital cameras arrayed around a live, line-reading actor. The cameras zoom in and track minute facial imperfections, like pores or whiskers. The 3-D information then streams from the cameras (at about one gigabyte per second) into a proprietary suite of computer programs that extract the actors' facial expressions, stretch virtual skin and grow synthetic hair. The results are impressive: In an epic fight scene, 100 clones of the trilogy's main villain, Agent Smith (Hugo Weaving) battle Matrix hero Neo (Keanu Reeves). Whose face is real is anyone's guess. "I'll be curious to see how many people realize that some faces in the movie are 100 percent computer generated," says Borshukov. "It's going to be a very interesting psychological experiment for the audience." -Nicole Dyer

Yes, it is a bit of a psychological experiment. When I saw this photo under the diagram in the article , I realized that it was most likely a "virtual Neo" that was making me all creamy inside when I got my first glimpse of it in the Superbowl trailer.
How do I feel about that?
Hmmmm.
I'm going to have to embrace the ideal that these CGI characters are not replacing the actors, only enhancing the way their performances are caught on film. I'm willing to bet that some fucknugget will bitch about "it's not really Keanu" doing all that fighting, but to that I'd say that it really doesn't matter, because this is a movie, not a showcase for Keanu's (or anyone elses) fighting skills and the whole film is what it's about. The Matrix is about breaking those physical rules. If the Matrix were to be limited by what it was physically possible for a camera to do around an actor, that same fucknugget would be bitching that the fights were "lame".
I'm sure that whatever a human actor was caple of? Keanu went there. And he went there with a passion.
Besides, Neo is more than a fighting machine. Much more.
While Keanu brings the physical dedication required for the role, he also brings the acting skills.
I will always feel that no one else could have played this role. Not like he has.

On another note, I'm completely turned on and geeked out by the fact that somewhere there are banks of computers storing every nuance of his face.

*Speaking of the WIRED article, the author-Steve Silberman- took the time to leave several really great comments on my earlier entry. I [heart] Steve.

~~ 2:19 PM
I will restore commments in a bit.
~~~3:08 PM
OK, comment feature is restored with a clean slate.
Thank you Tyler for calling me and being understanding.--krix

"Fucknugget??" I swear I learn a new word every day practically on the Internet! LOL :)

I enjoyed reading Steve's comments from earlier so thanks for the link! Very cool! Even Matrix Cool, I might say! :)

Uh Oh! Krix is going to turn into a hacker just to get access to that bank of computers! *grin*

krix, remember what ESC's George Borshukov said in my article:

"Our aim was to preserve the most minute aspects - every smirk, every frown - of how Keanu made Neo real."

Double EEK! I just finished my *freak out moment* and recovered enough to leave a comment in the original entry, and now I notice Steve is commenting here, too!!! *triple eek!* Now I can NEVER say anything about 'the JG hairdo' again! Aaargl! :-)

Ehm... I'll just focus on the Neo pic :-) Doesn't his hair look great? :-D
Btw, did they just do his face, or also, ehm, other parts? Because THAT could finally bring an end to your intensive studies of 'you know what' ;-)

That you-know-what looks all REAL to me. Raow. Would you kick a virtual Keanu out of bed for eating browser cookies? [grin]

But anyway, at ease soldiers, and feel free to go back to discussing Gaeta's hairdo or anything else. I have to go back to WORK, alas. I *did*, however, find out today that I'll get to see Reloaded on the 12th. Yay! (I know, you hate me.)

But it's been really nice chatting with you folks. Thanks for making me feel welcome!

PLEASE READ MY COMMENTS, THANKS:)

HI KEANU, YOU MUST BE CLOSE TO THE PERSON WHO OWNS THIS WEB SITE BECAUSE HE GETS A LOT OF PICTURES OF YOU. THANK YOU FOR POSING FOR THEM. PLEASE POSE FOR MORE.I LOVE YOU KEANU , THANK YOU.

Posted by: ***Danielle*** on October 23, 2003 04:30 PM
What's on your mind?.....
(new here? please read this before commenting)
Remember, this is a fan site.
Keanu Reeves is in no way connnected to this website.
Please do not make a comment thinking he will read it.
Comments are for discussion with other fans.
Thank you.