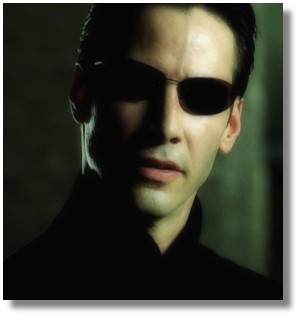 "I love Neo. I find Neo to be a beautiful man," Reeves tells Newsweek. "I love his dignity, his love for Trinity, his search. Playing him is like playing the best parts of us."

That's just too beautiful for words...

I love how excited he can be during interviews and you see his love for the characters and then he has things that he just won't talk about but will just smile and people leave him alone. He gets so much shit for his acting ability by reporters but they respect him as a private man. I like that. He has a presence that just makes it clear that he can't be fucked with.

Great article!! Dang, *another* magazine I have to buy! :)

In general, I luv the quality of exposure in these articles.
And this interview is wonderful.
Simply oooohh's, wow's and pleasure as I curl up and revel in this good read.
(One more mag to hunt down -- but hey I'm getting pretty good at it *smiles*).

I love that he had a red velvet couch made to make him feel comfy in Oz. Just the thought of Neo on red velvet shivers me timbers. Yum!

Thanks for article Krix, I did not know that Gloria had passed away...I am going to cry now, and damn that reporter for having to ask if the subject if needed to be changed.
oh god..16 more days. *begins deep breathing*

This issue of Newsweek is already out (at least in my area). The cover story is about SARS: What you need to know showing a woman's face with a face mask on. The date on the cover says May 5th, 2003. The Matrix article(s) start on page 56 I believe? For the "obsessed" among us who *have* to have practically "every" magazine. You know who you are (present company included) :)

As I read Ke's quote about the values he admires in Neo, I see why he was so committed to and passionate about the role, and made Neo's character so believable to us. And why he took on the sequels with no hesitation. *smiles* From what I've seen of various trailers, Keanu's zest and enthusiasm radiate in his portrayal. No wonder we're already blown away bigtime.

Just 17 more days . . . and in a few days more, IMAX. It just doesn't get any better. Sheer joy and elation! (Mental note: Also check newsstand for this Newsweek article.)


Posted by: phoenix IX on April 28, 2003 10:16 PM
What's on your mind?.....
(new here? please read this before commenting)
Remember, this is a fan site.
Keanu Reeves is in no way connnected to this website.
Please do not make a comment thinking he will read it.
Comments are for discussion with other fans.
Thank you.