If I have an aneurysm tonight, it’s out of gratitude

"I didn't suffer. Yeah, there's bruising and blood and kicks and concussions and you can't sleep because your legs ache and you cry when you're stretching and you're in ice baths and you're lonely and you miss your friends and your family and you're trying to keep it together and you're trying to live and fight and create for the next day. It's like going out to sea, man, you dont know where you are or how you are, but you want to keep going, you want to be alive." ~Keanu Reeves 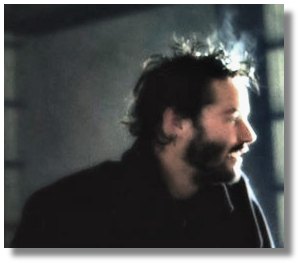 I feel so many things when I read in the Premiere article about how hard Keanu and the rest of the cast worked on Reloaded/Revolutions. Then I read what Carrie-Ann Moss says about training here and this interview from Lachy Hulme - Movie Hole 4/03


What were some of the hardest sequences in the film...was anyone hurt?

"Every scene was the hardest scene to film. You have no idea the level of mental and physical endurance required to sustain yourself in a project like this. From my point of view, it was the mental challenge of keeping six-hundred pages of script in my head -- meaning all the videogame stuff, plus the scripts for the two movies, even the stuff I wasn't in. I became kind of like the "encyclopedia" for some of the other cast members, because I memorized all this stuff. Shows you what kind of life I have, right? Too much time on my hands. But the physical stuff, the fighting and the action, that wasn't my problem. For that, you're talking about guys like Keanu and Hugo, and Fish and Carrie-Anne. Those guys busted their collective asses for two-and-a-half years! I mean, I can remember days when we were shooting in San Francisco, and I'd be putting my feet up having a grand ol' time making the videogame, and then you'd see Keanu getting carried -- literally carried -- to a little kiddies wading pool that they'd filled with ice. He'd lie down in it and they'd smother him in more ice, the poor bastard was so wrecked from the fight scenes he was shooting. And believe me, Keanu Reeves is no wimp. He's a big guy, he was in great shape. But smashing the shit out of one hundred Agent Smith's day-in day-out can take its toll, I guess."

First, I'm impressed.
Impressed that Keanu and the rest of this cast gave these films everything they had, for such an amount of time.

But I'm also grateful.
Even though he'll never read this, I just want to say "thank you" to Keanu.
Thank you for being so committed to the vision of the brothers, and to the character of Neo. Thank you for working so hard to make things "superperfect" for us, the audience... the fans.

Thank you for working through the pain.

Thank you for being who you are.

I'm so proud and grateful to be a fan of yours, Mr. Reeves.

Thank you for everything.

I second the emotion.

Words fail me when attempting to describe this man. Loyal? Honorable? Inspirational?
Carrie-Ann said it best I think... "He's the most beautiful man who walks." ...and she wasn't speaking of his physical beauty.

Why do I (we?) get misty? Because we're proud to be aware of this man and his accomplishments, and that he shares his talents with this world. And we know that he deserves the recognition he does not seek.

at times "proud" doesn't seem nearly strong enough on how it feels to be his fan, honored perhaps, just amazing, fucking amazing...

krix, your sentiment couldn't have been a more eloquent expression of how we all feel!

krix, your sentiment couldn't have been a more eloquent expression of how we all feel!

Posted by: phoenix IX on April 17, 2003 09:07 PM
What's on your mind?.....
(new here? please read this before commenting)
Remember, this is a fan site.
Keanu Reeves is in no way connnected to this website.
Please do not make a comment thinking he will read it.
Comments are for discussion with other fans.
Thank you.