People will bid on anything.

And another auction, thanks to Shell from DSF: 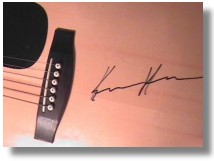 Once you get past THE GIANT FONT IN THE AUCTION DESCRIPTION, you'll notice that the sig would actually be upside down when you played it.

Not that you'd want to play it, since it's a ninety-nine dollar guitar with Keanu's signature, so it's basically just a really awkward-to-carry autograph.

Not nearly as bad at the slice of ham they were calling his spleen.

Eek! Do they mean 'a few maggots less'??? As if anyone would actually EAT it! Although, if it would have been a little piece of chocolate that Keanu had nibbled at... Hmmm... Interesting thought! :-)

Haha, a while back they were selling the Bronco that was used in The Gift, and one of the selling point was the assorted trash and debris in the back including a few half-consumed bottles of water that "may or may not have been drunk by Keanu Reeves".....

Posted by: tess on April 2, 2003 07:01 PM
What's on your mind?.....
(new here? please read this before commenting)
Remember, this is a fan site.
Keanu Reeves is in no way connnected to this website.
Please do not make a comment thinking he will read it.
Comments are for discussion with other fans.
Thank you.