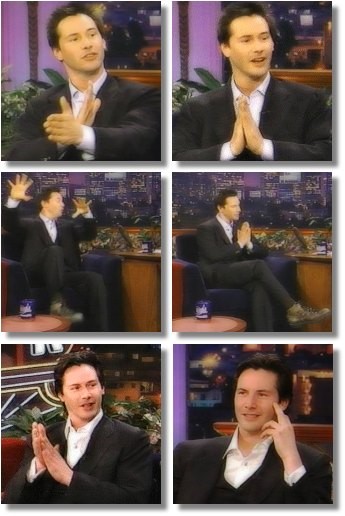 Hehe....I'd love to see him trying to express himself with his hands tied behind his back.

he gives everything his all, his full being.

Ke expressing himself without his hands - I cant, nor do I even want to, imagine it! I think its a cute Keanuism!

Only thing, now I really want to see him on Lenos show, as if he wont be busy enough as it is.

I'd say it's a safe bet that he does Leno sometime in the next 47 days.

I love his expressive hands as well, Phoenix. Wasn't criticizing Mr. Reeves in the least. It's endearing.

I enjoy watching him express himself in any way.
acting,playing the bass,or just explainning things to make people understand.
just imagine him in bed.......;o)

No apologies necessary, Ann. Unfortunately, with my imagination, I took your comment in the *uuummmmmm* good spirit in which it was given. *smiles* (It's all good!)

he should've been italian with those hands....no...nevermind, perfect as is :)

Keanu is hot whatever he does. In Bill and Ted's Excellent Adventure he is so funny. I love it.

Posted by: Iris on February 11, 2004 06:19 AM
What's on your mind?.....
(new here? please read this before commenting)
Remember, this is a fan site.
Keanu Reeves is in no way connnected to this website.
Please do not make a comment thinking he will read it.
Comments are for discussion with other fans.
Thank you.