Another article, this one also from 1994. Thanks kaz. 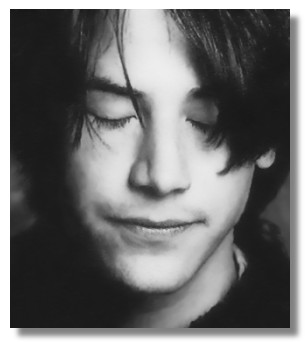 We love you Keanu...

even if you can't get a girl

Keanu denies the US tabloid claims that he's a "hellraiser". "Cool!" he says, grinning from ear to ear, "But I'm not really a hell-raiser - I wish I could be."

Frankly, I don't really believe him. I can see the glint in his eye and, let's face it, Keanu has always been considered a bit of a party animal. Even the movies he's been working on lately are action-packed adventures! In his latest film to hit the big screen, Speed, he plays a freeway-speeding cop who saves a busload of people from being blown sky-high. And he's now working on a cyberpunk gangster-type movie called Johnny Mnemonic with Dolph Lundgren.

But perhaps, behind the scenes, Keanu really has changed. I mean, he hasn't been photographed at any of the trendy Los Angeles hangouts for quite a while. In fact, he's been keeping a very low profile since the death of fellow party-boy and close friend River Phoenix.

The Keanu I'm talking to today is much less laid-back than I expected. Sitting opposite him in a suite at a Beverly Hills hotel, I discover that he's just not out there anymore. Instead, he's talkative, funny and modest. And he's definitely not the grunge god he used to be, either.

His hair is short and spiky, and he's wearing a smart black suit. Close followers of the recent Reeves roster might wonder if this change has anything to do with his parts in Much Ado About Nothing and the forthcoming epic Little Buddha (to be released at the end of July), for which he spent several months living in Nepal and India, and nearly became a Buddhist himself!

But Keanu reckons it has nothing to do with these films. "I've just been through so many years and experiences, I guess, and they've worn on my back. Maybe it's just time. I'm getting older, I turn 30 this year." He ponders the figure for a moment. "I guess something inside of me is just waiting to take hold."

I say to Keanu that a lot of guys nearing 30 might be considering marriage... "Oh, yeah, definitely. Oh my God, it's driving me crazy I don't know where it came from but all of a sudden it's like, 'I need a mate'."

Is there a potential mate on the horizon? "Oh no, I guess I'm single."

Unlike Johnny Depp, who's less than a year older than him, Keanu doesn't have three broken engagements under his belt. "I've been lucky, though," he says, almost apologising. "I've known some incredible women, but I've never come close to marriage. I've never proposed and I've never been proposed to."

OK, so what about Little Buddha? He tells me that doing the film changed his life. "I'm not out on the street helping to feed the homeless. I get to a few charities, but at least in my own small world, I have become more patient."

Keanu says he nearly missed getting the part on this life-changing film. The first time he met Bernardo Bertolucci, the director of Little Buddha, he was friendly, but didn't seem very interested in offering him any work. "He told me the story of Little Buddha and said he'd seen My Own Private Idaho and liked it. But I guess I wasn't right for the part. He said, 'Well, it was nice to meet you, but now I have to go off and cast this film'. Then we met a few months later when I was in Tuscany (filming Much Ado About Nothing) and he offered me the part. I later found out that he cast me because of my innocence," he says, wrinkling his forehead and looking surprised.

In the film, Keanu's character is the son of an American couple (played by Bridget Fonda and Chris Isaak) who don't suspect there's anything unusual about their son, until they're told that he's actually the reincarnation of Buddha. "The film's about this man-boy who knows nothing of the harshness of existence; suffering, death and old age."

Keanu had a bit of an embarrassing moment during filming when he couldn't quite do what was required of him. "I was very embarrassed that I couldn't do the lotus position for the film (a yoga position that's quite tricky to get into). I worked very hard at it, but I just couldn't get it. When Mr Bertolucci realised, he said, disbelievingly, 'You can't do the lotus?' He was horrified. And I was like 'Oh my God!'. I did manage it once for about 20 seconds, but not for the film. They ended up covering my legs."

One of the film's oddest scenes is where Keanu wades into water and practically has a conversation with a water buffalo. "Yeah, wasn't that great," he almost squeaks. "The buffalo came up to me. Oh my God. Bertolucci was in love with the buffalos. He loved their eyes. In the movie there's one incredible close-up shot of their eyes. In India, the cow is sacred and their eyes signify wisdom. So I got in the water and this buffalo just turned towards me. I had to go up and talk to it."

Sounds a bit dodgy! "Oh not at all. I wasn't scared. What was funny was that the place where I went into the water had a little beach, and up from there was a little bank of sand. In between the two they put cages to prevent crocodiles getting at us. And they had men with shotguns. At least that's what I was told after I got out of the water." He laughs again, and I can now see that he's having me on.

But Keanu definitely wasn't kidding when he gave me the spiel on his preoccupation with meditation and doom. "Have you heard of chakras? They're energy centres. I had an experience which, basically in the beginning, was a feeling of magnitude. I was meditating in Tuscany and I felt as big as a valley. I'd move my arm and it would feel like it was 30 kilometres long. The man who taught me to meditate said to me, 'As soon as you think you know something, you don't know it'. I was thinking 'Oh no, doomed again. Just doomed'."

Back in 1991, Keanu said the same of his career goals: "I don't want to live a stupid life. I know I'm doomed, I'm just a dog." So has his master plan changed? "Actually I'm thinking of coming back as a cat. That way, at least I'll have nine lives. No, it's basically the same in 1994. I've worked on not leading a stupid life, but I'm still doomed. I'm trying, though."

At the inevitable mention of River Phoenix, Keanu's face falls. Among the actors in River's age group, Keanu was the closest to him. When River died, not a single young actor mourning his death made a public statement (public comments were left to two of River's more mature co-stars, Harrison Ford and Dan Aykroyd). Maybe it was the drug connection, or perhaps they were all just gobsmacked. It seems Keanu certainly was - this is the only time during our conversation when he is stuck for words. He chooses them carefully, and makes the announcement: "I wish he wasn't dead."

How did Keanu hear the news? "I was downstairs in my house and a friend heard it on the news upstairs." Keanu can't even answer a question about how he felt. He looks misty-eyed and mumbles, "I miss him very much."

Buddhists believe in reincarnation - in other words, when someone dies, they are reborn as another person. So does Keanu think River may still be out there somewhere? "Hmm, where is Mr Phoenix going?" he says, cheering up. "I don't know. I take reincarnation for granted. It never seemed to me to be something that wouldn't happen."

On a more earthly note, I ask Keanu how he fared in January's devastating LA earthquake. "I jumped out of bed and fled my house. I live on a hill so it shook, but it was nothing compared to what the people of Northbridge felt," he says, definitely playing down his experience. "So I left the house, then I had to run back inside to get dressed first."

"Oooh," I tease, "I wish I had been there." Keanu bursts into uncontrollable laughter. "What? To help me find my things?" It doesn't seem to occur to him that thousands of girls the world over would love to see his naked bod!

Posted by: Keanuette on March 16, 2003 12:37 PM
What's on your mind?.....
(new here? please read this before commenting)
Remember, this is a fan site.
Keanu Reeves is in no way connnected to this website.
Please do not make a comment thinking he will read it.
Comments are for discussion with other fans.
Thank you.