Big Love to kaz, who has sent out some articles from the past. I'll be posting them over the next couple days... 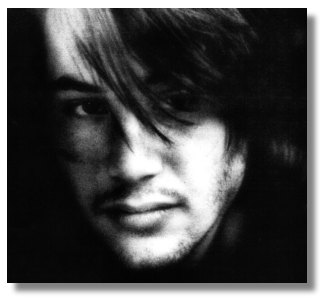 Three years ago he was the ultimate slacker dude. Today he's speeding toward superstardom. Is Keanu Reeves finally ready to grow up?

He quotes Shakespeare, but often ends his sentences with an enthusiastic "Dig it!" He throws his bodacious bod under moving buses, but claims to be afraid of the dark. He doesn't have a permanent home, yet fears for the homeless. He's Keanu Reeves, and meeting him is an excellent adventure.

The first time we met, three years ago, Keanu was pure Ted. He strolled into a Los Angeles hotel wearing a grungy T-shirt, a ratty blue sweat jacket, and torn jeans. His hair? Uneven, dirty, failing in his eyes...

Fast-forward to the present. Another hotel, this time in New York City. The 30-year-old actor looks, in his own words, "hunkster studly." His hair is cropped Air Force short and he's wearing a sleek khaki suit. But don't freak out. Keanu hasn't gone from Speed action-hero man to slow businessman. He is definitely still part dude.

Oh no. I never, ever take the bus. But I dream about buses every night.

2. Are you psyched that Speed was such a megahit?

I like that the movie is so imaginative, man. I wanted the SWAT guy I played to be "every-guy," not this hunkster studly, but sort of sensitive. There is this humanity in the picture. We even reshot a couple of the action scenes because the emotions weren't there. For example, after the bus blows up, when Sandra Bullock and I look at each other and get very emotional, we shot it one day and weren't happy with it. So we came back to the set the next day and asked to do it again. We wanted those characters to have a real relationship, and it was all in the looks they gave each other.

3. What do you think of your new title, Keanu Reeves, Superstar?

How nice of people to say that. But it's not a reality to me. I'm a very private person. People talk to me about my career and sometimes I ask, "What career?" I guess I can be very uncomfortable with a lot of attention. Basically, I'm a person who doesn't want too much.

4. Did you really risk life and bod for some of those Speed stunts?

Yeah! I jumped out of a moving Jaguar into the bus. It was cool. My adrenaline was really pumping, I was also under the moving bus, which was going about 30 miles an hour. Remember the part where I dismantle the bomb? Well, it's really me under the bus. It's sort of weird to have a bus on top of your face, but it's all really safe. The stunt guys make sure you can't get hurt.

Nah. I was running and jumping and playing. I enjoyed it.

I'm not claustrophobic, but then I've never been trapped in an elevator for 25 hours, so who knows? I don't go in caves because I'm afraid of the dark.

[Laughing] Younger and more afraid of the dark. Actually, I had an interesting childhood. We traveled. Sometimes we had cooks and sometimes we ate generic food. It was weird. A real free existence. I call it "Attention to more, but with less."

8. When did you know you wanted to act?

When I was 15 and a half I said to my mother that I wanted to be an actor. Period. It was settled. From then on, I started to take acting lessons. I was always working on scenes. The weird thing is I don't know what made me tell my mom that I wanted to act. But I did.

9. What's so cool about acting?

It's about investigating life. I can explore who I am and how I feel. Hopefully, I'll get to continue acting till I die.

10. Speaking of acting till you die, in your next movie, Johnny Mnemonic, don't you play some cyberdude with a data chip in his brain who's being chased by killers?

I play this guy who doesn't have an altruistic bone in his body. He's very self-centered. Very angular, My suits are sharp angles. I got to work with a lot of shapes and emotions of shapes.

11. Oh. Okay. Next question. What about the other movie you just finished?

It's called A Walk in the Clouds. That movie wasn't physically tough, it was mentally tough. It's about a World War II officer coming home who meets a Mexican girl who's traveling from college to her home in Northern California to work the vineyard harvest with her family. She's single and pregnant. I'm married, but I'm on the road trying to sell chocolates. I tell her, "Why don't I pretend to be your husband for a night to save you from shame? I'll leave in the morning and never come back." That way she can say I abandoned her and the baby. I'm the rat. I start to do that, but we fall in love. It's a big turmoil.

12. How do you feel about that California art college offering a course on the films of Keanu Reeves?

I just asked myself, Why, why, why? But I was also kind of curious. I read an article that said the teacher was interested in the detachment that he felt I brought to some of the pieces I've done and the variety of genres. The teacher uses it as a launching point to talking about storytelling.

13. Here's a big one: How would you like to change the world?

We should make the world a kinder, more respectful and passionate place. Like the Little Buddha says, "To learn is to change. The path to enlightenment is in the middle way."

14. Other then acting, what else is your passion?

I don't like anything else to the same extent. But I've done some things for Pediatric AIDS and I've given some money to the homeless. Doing good makes me feel good.

15. What's the one thing about you that most people don't know?

I recite Shakespeare to calm myself down. I love Shakespeare. When I was 18, I did Romeo and Juliet onstage. It's very relaxing when you read it out loud. Try it. I really like Hamlet. I'm doing it onstage soon and I'm learning my lines, right now.

I play hockey. I'm in a couple of leagues and I'm a goalie.

That if I died, all they would put on my grave was "He Played Ted." But I don't worry about that anymore.

I read that only last week...

Posted by: Keanuette on March 15, 2003 07:22 AM
What's on your mind?.....
(new here? please read this before commenting)
Remember, this is a fan site.
Keanu Reeves is in no way connnected to this website.
Please do not make a comment thinking he will read it.
Comments are for discussion with other fans.
Thank you.