The Greatest Lounge Band EVER

I'm late to post today because I'm still recovering from last night, which ruled. I got to hang out with Marcie and her love, Alan. We met at Bally's at some tequila bar with really slow service and chatted for a few (which was great because I missed them last time they were in town and really didn't get to spend time together during the chaos that was BlogCon, either).

And we got to experience the greatest lounge act ever.
Chey, Suzie and Mikey know who I'm talkin' 'bout... 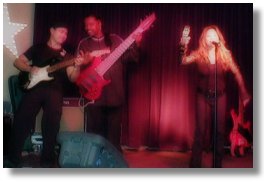 That's right, The Sounds of Joi. Live at the Imperial Palace.
I couldn't believe it when we walked in and they were playing again.

Joi is amazing. Teeny little thing with a great big voice. She can sing like nobody's business and even throws in some moves as well.

And the man behind the Joi, Bass Face. Yes, there are seven strings on that beast, and he works it. Bass Face puts the fun in funky, baby.
There was a new guitar player who was very cute but didn't play with his teeth like his predecessor. He was cute though. Did I mention how cute he was?

So it was quite the Boogie Wonderland and lots of fun. No sign of Chey's favorite dance partner, but we had a reasonable facsimile. Yes, those are roses and beer in his hands. The roses were delivered to Joi during the set and Cassanova there actually started snagging them and handing them out to all of us ladies. Poor Joi.
She finished out the night with a smile, though. And we got our groove on until the end at about 1 am. Stumbled back to Bally's and made plans to get together again soon. Either here or in LA, I'm definitely going to party with Marcie and Alan again soon.

This is the Las Vegas you don't see in commercials, kids.

And it's hella fun.

waaaaaaa! I miss you. And Marcie. And Vegas. And tequila.

I miss you too, girl. Who's in charge of planning BlogCon this year?

Wow. Beer. Roses. And a greying mullet. How could you control yourself so well, Krix?

I like to think that I'll never be so drunk as to dance with a mullet.

See...this is why I should never dance in public....somebody always takes a picture when I'm at my dorkiest!! It looks like I'm doing the gorilla dance or something in that picture!

No way, you're groovin'.
And Alan's expression is priceless.

So the Chia Mullet I got you for your birthday was a bad idea? Gee, you're so hard to buy for.

I don't know who's doin' BlogCon. :/ I do know however, that we're soooooo going back to Vegas first chance we get. ;)

ooooooooooooooh, you were right on bout the bass player, mmmmmmmmm

krix - shut. up! if Donnie asked you to dance (or more likely, dragged your ass out on the dance floor kicked you to the ground), you'd SO be there. hee!

i'm soooo jealous that i missed the sounds of joi! my favorite band!!

oooh girl that mofo took her roses!!! I'll bust his ass if I ever see him!!
you guys rule for calling me I was grinning the whole way home

can't wait till we all get together again

did they play september???


Posted by: gnome-girl on March 7, 2003 10:27 AM
What's on your mind?.....
(new here? please read this before commenting)
Remember, this is a fan site.
Keanu Reeves is in no way connnected to this website.
Please do not make a comment thinking he will read it.
Comments are for discussion with other fans.
Thank you.