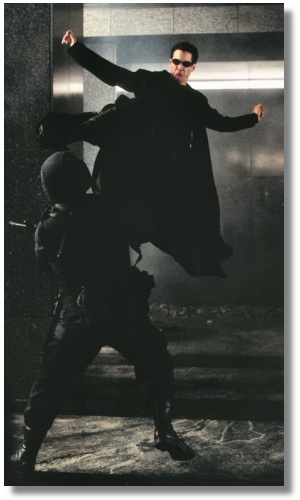 Paul M. wrote me with this query:


"Can you please recommend any Keanu sites / web pages offering eloquent quotations (or even fan poetry) pertaining to what makes the Neo character so appealling and unique?"

I couldn't think of any specific web pages to direct him to (though I did suggest he check out some Matrix message boards), but I told him I would pose this question you you, dear readers....

What is it about Neo?

To get the ball rolling, here's a few things off the top of my head.

There's the pure graceful physicality that Mr. reeves brought to the role. I can't imagine anyone else as Neo in that regard.

As far as character aspects go, I think there's a humilty to Neo that makes him stand apart from your everyday "hero". He's a badass not for badassedness' sake, but to save Morpheus and Trinity and by the end of the first film, all those still enslaved in The Matrix.

Also, since his "superpowers" aren't really to do with physical strength, but rather an understanding of how The Matrix works, I think Neo is sort of a symbol for the power of the mind.

He's a former loner computer geek that saves the day and gets the girl, all without technically leaving his chair.

You gotta love him.

One thing Mr. Reeves brought to the character of Neo that he didn't bring to Siddhartha (in Little Buddha), is a non-laughable serenity that follows his "enlightenment". At least I didn't laugh (and forgive me Krix, but I laughed everytime I saw him in his saffron robes in Little Buddha).

In the Matrix he just has this cool detatchment that starts after his session in the chair with Tank and Morpheus.

I believed he could save all the souls still floating in the tanks, powering the Matrix.

He just does a fine bit of acting in what could have very well been a paper flat role.

Neo is a beautiful mix of waifboy vulnerability and ass kicking superhero. The most beautiful moment in the Matrix (IMHO) is the moment when Trinity wakes him up with a kiss, a la Sleeping Beauty.

It's so perfect: he's just kicked some serious ass, and discovered that he's the most powerful human being alive, but he's still gentle and humble enough to be bowled over by his first kiss. And it *is* his first kiss. Brilliant!!

Neo IS the one

I like the fact that he didn't believe he was the One until it happened. He power was there all along and dire circumstances, not ego/trying to prove himself, brought them to light.

Oh, and the line to spank Scott starts behind me, ladies ;)

Wait. I tried to say something nice. I thought I succeeded.

And I'm an old fashioned guy. I don't go in for all that leather and spanking.

I think for me it's the fact that he's just a true "everyman." There is nothing really special about him and he's just another drone worker bee when you boil it all down to it.

But, then in the Matrix he becomes a superhero sort of persona that can kick anyones ass.

i think scott needs a kiss and a spanking, so i'll get in that line! (a kiss for the nice stuff about Neo, a spanking for laughing at keanu-as-buddha) and i'll wear my leather chaps... ;)

as for Neo, his total lack of ego is unimaginably sexy. and let's not forget, even as C.C.'s "everyman" drone, Thomas Anderson was on a quest of epic proportions.

Posted by: Lori on February 3, 2003 11:15 PM
What's on your mind?.....
(new here? please read this before commenting)
Remember, this is a fan site.
Keanu Reeves is in no way connnected to this website.
Please do not make a comment thinking he will read it.
Comments are for discussion with other fans.
Thank you.