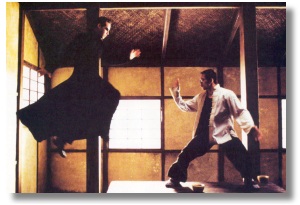 There's a bit on the Matrix in February's Empire mag, thanks to Wrygrass for scanning the pic and sharing the article, where my ex-boyfriend Joel gets a little snarky.


"Without naming names, Matrix producer Joel Silver freely admits that in the past he has overseen some pre-packaged, formulaic and, let's face it, piss-poor sequels. "Usually, we've made something out of something that was never supposed to be there," Silver admits, "and sometimes they work better than others. But they were never meant to be, they were just sort of willed into existence," However, Silver is keen to point out that The Matrix Reloaded and The Matrix Revolutions are different. For starters, the mysterious (they never give interviews) Wachowski siblings always perceived Neo's adventures as a trilogy, so these films are not 'sequels' in the traditional sense. "This story did exist," Silver says, "and the purpose of the first movie was to set up a world and a situation which would allow the characters to live so the story could continue." That said, it was only when those first weekend grosses ($28 million in the US) were counted that Warners would even listen to sequel pitches. "We didn't know that it would continue, we just hoped it would," Silver says, keen to point out that the $63 million-budgeted first movie was a surprise smash. "Actually, the first script ended further on than the first movie ended - you actually went to Zion, which we really felt we just couldn't do [on the budget]."A 250-day, back-to-back shoot in Sydney and an estimated $300 million budget proves that this time, Silver and the boys have all the money and toys they could ever want. And virtually the first thing the filmmakers demanded was the back-to-back releases - Reloaded in May, Revolutions in November - a release pattern that hasn't been attempted since Back To The Future Parts II and III, 14 years ago. "The boys felt they didn't want to wait [another] three years," Silver says simply. If you think of the next two installments as one movie cut in half - as both directors do - then the result is the first billion-dollar movie since Titanic."

and a yummy meal at that, krix! sure hope you're able to patch things up with Joel before the premiere...

Posted by: Lori on February 2, 2003 11:53 AM
What's on your mind?.....
(new here? please read this before commenting)
Remember, this is a fan site.
Keanu Reeves is in no way connnected to this website.
Please do not make a comment thinking he will read it.
Comments are for discussion with other fans.
Thank you.