the up side to being an Ass Clown

I wasn't going to use this famous picture by Greg Gorman as an Ass Friday picture. It was just way too obvious.
But when I saw this signed version I changed my mind. 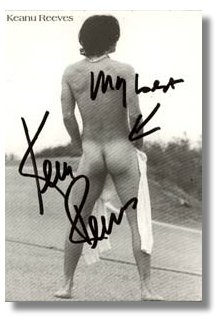 It's stuff like this, confirming that Mr. Reeves has a sense of humor that makes me think "Oh, I would much rather spend an evening talking and goofing around with this guy than getting naked and messing up his sheets..."

Of course, then I look again and start to waver.

But honestly, if given the choice between making this guy laugh or making him come.....I'd choose the first one.

I suppose I wouldn't complain if one led to the other, however.

This picture was sent out earlier in the week by the Pic-of-the-Day club.
Thank you to Margarete.

I just figured out what he wrote. His best indeed! Happy Ass Friday everyone!

Took me a while to figure out what that said too. "His best ass-et." He's such a caution!

Krix, the goal is to make him laugh while he's coming, then snuggle.

"make him laugh while he's coming, then snuggle"

MacKrix: What bloody woman is that? She can report, as seemeth by her plight, of the revolt, the newest state.
Malcolm: This is the sergeant(ess),
Who like a good and hardy soldier fought
'Gainst my captivity
Hail, brave friend! Say to the queen the knowlegde of the broil
As thou didst leave it.

My Liege! *Kneels down humbly before the throne*
Even though it is our national holiday 'Happy ass Friday' today, I have a matter of great urgency to discuss with thee.
*Presents blood-stained sword to her gracious sovereign*
Please allow me to point your royal attention to the defense-strategy of your beautiful kingdom. By exporting all the guns, my beloved majesty might have to succumb to the evil forces gathering at the borders of Keanugolia, the multipying army of the nation Enquirer, with its despicable citizens the Paparazzians. A secret weapon against these villains would be highly useful.
Please heed this advice from your loyal subject *Gracefully bows*

Actually, I'm not too worried about invasion at this point. We Keanugolians are widely underestimated and for the time are happy to be assumed a bunch of meatheads that are neither noble, nor sublime.

I see Paris, I see France, I see Keanu Reeves with NO underpants!!! LOL! Sorry I'm easily amused and sometimes I crack myself up. :) His sig ("his best") kind of reminds me of what he wrote on some Hamlet playgoers ticket stub on opening night: "To bee or not to bee." I know it's a simple play on words, but it just cracked me up (see above about being easily amused etc...). And for the super-curious among you, no sadly, it was not my ticket stub that was autographed such (I read about it in an Canadian magazine). Great pic btw! Keep up the great work Krix, ya crack me up! ;) Happy 2003!

Ha ha, because he was talking about his love for Shakespeare in the interview that went with the pic, I wanted to stay in style :-) without making the obvious 'shaking his spear' joke.
BTW I am aware that it's actually Duncan, king of Schotland that says the first line, but Mackrix sounded better & left a clue what play it was from :-)

You guys crack me up!

Krix, when you get that *famous* e-mail from him ("have your people talk to my people") you sure will have the whole thing mapped out. Don't implode. Save this, think about it and how to achieve it. ;)

hallow ,
pleas ineed much photos of nice asses
thank you.

Posted by: jojo on October 17, 2003 07:28 AM
What's on your mind?.....
(new here? please read this before commenting)
Remember, this is a fan site.
Keanu Reeves is in no way connnected to this website.
Please do not make a comment thinking he will read it.
Comments are for discussion with other fans.
Thank you.