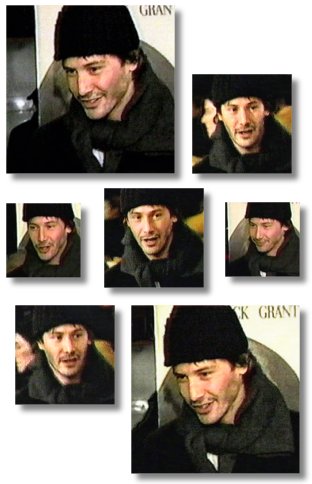 Thanks to ~L for these pics

I wanna see these Bigger!!!!!!!!!
waaaaaaaaa
maybe in the magazine, sigh

Krix, where did you get these oh-so super pics of Ke! As the vocab just totally goes out the window - just oh's, oooh's and ahhh's. One more way you're helping us fans get the Neo Year off to a good start! Thanx!!

They're screen captures from some TV footage that a friend sent me. I know they're small but any bigger and they're all pixelly.

Thank your friend for all of us.

ooh.... that can brighten you the darkest of days. Thank you so very much Krix and friend!

i have words, and strangely, they're usually the same four: "GOD, he's so beautiful!"

Oohoooh, yum!! Thanks for posting them krix!
Is this just footage or can you hear what he's saying as well? If there's an interview me wants a recap girl!!

~L did the captures and sent them to me. I never saw the footage.
MAYBE...just maybe, she will bring her ass out of lurkdom and say something about it.

the segment was on that particular film opening and focused on its stars, so Keanus screen time was all of 12 seconds. he did grin lots and had a smile in his eyes, and in that brief time managed to get in a head bob and turn, two lip smacks, a lunge and a shoulder shrug. he do have some physical Presence. it was broadcast with a voiceover of also at the premiere, a scruffy Keanu Reeves, sandras speed costar whos date was his niece, isabelle. (niece?) to my frustration you COULD hear Keanus voice buried under the speakers prattle. they showed him arriving then being interviewed by some chick, speaking with a delightful gleam. you could just barely hear his low rumbley purr. her footage probably never used by anyone, but somewhere that woman is still watching it over and over again.

Absolutely lovely, thanks Krix and ~L.

Thanx, ~L! That was a really nice description, with the shrugs and all (I could picture it very vividly)and the remark about the woman watching it over and over again *giggle* ! Mmmm... Makes me wonder... I suppose if you get a fake press-card, you COULD interview just about anyone, huh? :-D And of course I'd send the tape to you & Krix ;-) Well... I'd never do it, but it certainly is a nice thought! :-)

Thanks for the description ~L and thanks for posting the pics krix!! It seems he was happy to be there and what a lucky little one he had with him!

Posted by: Jena on January 7, 2003 12:46 PM
What's on your mind?.....
(new here? please read this before commenting)
Remember, this is a fan site.
Keanu Reeves is in no way connnected to this website.
Please do not make a comment thinking he will read it.
Comments are for discussion with other fans.
Thank you.