Thanks to angel0164 (yet another Lori) for this pic and the news that a pair of Keanu's sneakers are going to be auctioned off down in Australia to benefit a youth charity. I don't have any details, but I've emailed the contact. They haven't gotten back to me. 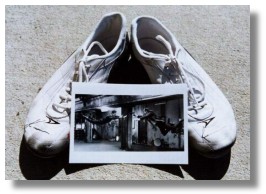 Anyway, speaking of Keanu footwear...
QUICK! What movies has he worn Chucks in??? I know he and Alex both did in Excellent Adventure....any others?
We've GOT to get him on this list.
(via another Golden Chuck honoree, Wil Wheaton)

Update: Success! Lori O found me a picture of Tommy in the craptacular Teenage Dream wearing his Chuck Taylors!

This Just In!-- The character Chris in Permanent Record has been spotted boarding a train wearing white Chucks.

One last update: read on for the letter I just sent off with pics attached

I submit to you evidence that the actor Keanu Reeves should be added to the honorees of the Golden Chuck award.

In addition to his appearance in Chucks in 'Bill and Ted's Excellent Adventure',
Mr. Reeves' has at least two more characters that have chosen Chuck Taylors to don while making those first steps to superstardom:

Tommy, in the craptacular 1986 Olivia D'Abo vehicle- 'Flying' aka 'Dream to Believe' aka 'Teenage Dream' (the movie so bad they renamed it three times!) wore dashing red Chucks as he pined over the insipid Ms. D'Abo.
http://us.imdb.com/Title?0091065

Chris in 1988's 'Permanent Record', wore white canvas Chucks on the train right before the real angst kicks in....A heart-rendering tale of teen suicide and why it really sucks to be the best friend of the kid that cacks it, this movie has an ending that screams "After-school special" Yet, it's a feature film! http://us.imdb.com/Title?0095853
Thereby qualifying for your criteria, no?

I submit photographic evidence courtesy the faithful readers of my site:
www.keanuvision.com and my patented technology of taking pictures of a paused video with the digicam.

I thank you for your consideration and look forward to sending you lots of hits and business (Keanu fans love Chucks! and Videos!) on the occasion of Keanu receiving the Golden Chuck honor.

Krix, wasn't it the Teenage Dream to Believe movie? I had a red pair of these in school. And no one understood me then either.

Hmm, could be. If we can confirm that he wears them in more than one film, I think we can get him a ~Golden Chuck~.
I'm not sure if I'm willing to watch Dream to Believe again just for that, though.

Yay, Rhonda for takin' one for the team!

Krix, Nominate the Man! He's wearing a very dirty pair of RED Chucks! My, God, they're just like the ones I wore in school.......

Oh yeah, Tommy in Dream to Believe definitely wore chucks! What about Matt? Marlon? Ah, man, time to do a little Monday night research! And hey, I had a pair of chucks in college that were black with a metallic multi-colored checkerboard pattern -- my funky shoes!!

Whee, ladies!
I'm thinking that "that Tod" might also.
I'm going to try and take a picture of whatshisface in 'Dream to Believe' to send and anxiously await your reports on other possibilities.

I had a pair of red Chucks in high school that I completely vandalized with sharpies and glitter paint. I wore them with flourescent pink socks.

I had Carolina blue low-top chucks in high school. The funky black ones were high tops. I think I need another pair of 'em right now!! Wheeeeeee!

Oh, that's "sky blue" for those of you not in the Atlantic Coast Conference of the NCAA. I think I also had a pair of white chucks at some point, maybe in Jr. High? I'm off to the videos now. :)

Matt didn't wear them. Marlon wore those brown leather shoes that had a heel on them. Tod didn't wear them either. Rupert and Chris wore boots. I can't think of any other characters who did. I notice this stuff. Yeah, I'm weird.

Whoa now, I watched enough of Permanent Record to catch Chris wearing white high-top chucks in one scene. You know where MG follows him onto the train, and they get into an argument? Definitely chucks.

You go, krix! You're really workin' it tonight, chick!!

Wow, I completely forgot about the white chucks Chris was wearing! I only remember boots.... Wonder why? Way to go Lori! The Chucks are indeed cute, but the boots, ah the boots.....

Posted by: Keanuette on September 13, 2002 05:03 AM
What's on your mind?.....
(new here? please read this before commenting)
Remember, this is a fan site.
Keanu Reeves is in no way connnected to this website.
Please do not make a comment thinking he will read it.
Comments are for discussion with other fans.
Thank you.