And it didn't hurt a bit

OK, so I don't actually have a DVD player yet, but I'm shopping for one.
I did however, purchase my first DVD.
Who's the man that finally got to me to break my DVD cherry?
Was it Keanu and the new Special Edition of Speed with all those yummy extras? Nope.
Was it Kiefer and the whole first season of 24 complete with alternate endings? Nope.

It was C.C. Chapman, the REwind Movie Awards' Director of the Year. I ordered his award winning short: Inquisition. 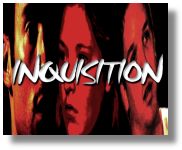 It was directed by C.C. (of course) and written by Garth Franklin, who some of you know from Dark Horizons.


"Blind dates are always tough, especially when you awaken the next morning to find you're the prisoner of a serial killer. Now, Daniel and Jennifer are trapped at the mercy of Travis Krieger - the so-called 'Angel of Death', one of two killers going around committing violent murders throughout the city. Twists abound in this dark tale which will blow your mind."

More on the story, behind the scenes, and ordering this independent gem can be found here.

I'm no longer a DVDVirgin and C.C.'s the man.

You and I together. Bought Cider House Rules last month on DVD. Now all I need is a player. Maybe next year. Or there is always the boys Playstation 2!

I don't even have that, although it's in the running. I'm afraid I'd spend all my time playing Tekken if I had one, though.

Well I can honestly say that is one vice i don't have. Although everyone of the boys do. Even Liam likes to watch them play (it's the repetivity) and is learning the controls.

Not I - though I do like that Tetris game, about all I can manage.

Krix,here's an advice for you :
Don't get the new Speed DVD!!!
It aint that good...
but Keanu is there so it worth it.

Wow! Am I flattered or what!!!

I've never taken a girls cherry before. So this is a first for me as well! *grin*

What's wrong with the SE DVD?

It's way better than the first one, which only had the trailer.

I think it's great! They definately got it right this time...

Nothing's wrong with it, I just keep putting off getting a player and Keanu DVDs because I know I'll have to replace my video collection with DVDs and I just can't afford it.
I hear the extras are great. One of these days...

Posted by: krix on September 7, 2002 10:30 AM
What's on your mind?.....
(new here? please read this before commenting)
Remember, this is a fan site.
Keanu Reeves is in no way connnected to this website.
Please do not make a comment thinking he will read it.
Comments are for discussion with other fans.
Thank you.