Thank you to my good friend, tess for sending me this article link...

Zen and the art of dude maintenance.

It's a nice fluffy, shiny, happy article, and it's from a Canadian fashion magazine.
Let's talk about Keanu and fashion, shall we?

First off, there's no denying...the man cleans up very nicely.
But also, he's one of the few people on the planet that make looking bad look oh, so very good.

Nice. Pants. Dude.
Who dresses like this? Those are Armani pants that he's cut the bottoms off. Is he making a statement? Is he just weird? I wonder if it's that fashion sense is irrelevant since he makes anything look good. Perhaps even he does it intentionally in an effort to subdue his inherent gorgeousness, thereby sparing those in the vicinity of spontaneous human combustion.
Um....it doesn't work, in fact it fuels the fire.

I know people that can't get enough of him in those boots *cough*tess*cough*.Which is a good thing, because he sure seems to wear them everywhere. Does he have more than one pair? What's going to happen should they ever become completely unwearable? I think he should donate them to the Smithsonian.

It's a look that's worked for him for years. Amazingly he pulls it off without looking all "Miami Vice".
He's even gone a step further and worn the suitcoat over a leather jacket.

I daresay anyone else would look like a screaming dork in this.
Not Keanu, the man looks good no matter what. I've seen (read) women swooning over him in a holey t-shirt as if it were...well, holy. I think that's part of his appeal, too. He wears what he's comfortable in and just doesn't care.
I know that I love this about him.

Then there's his hair.
I think that's a whole 'nother post.... 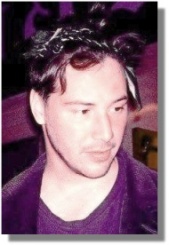 All of this is sooooo true! Honestly, I think it's a guy thing. Some men could care less how they look or what people think, and I think Keanu falls into that catagory. (Dare I use the word slob?) LOL

What's that on his head??

These are really Armani pants...??

Anne:*snerk* You know, I hesitated to use the word "slob" but actually, left to his own devices, I think he may very well be. The sexiest slob I've ever seen, of course. He can leave his socks in the middle of my floor anytime.

Nat: Hee! I have no idea what or why that thing on his head is. And yes, the pants are part of an Armani suit that he got quite a bit of wear out of. I think that's the top half of it over the leather jacket.

i love how slobby he is. it makes him more human and adorable and sexy and makes me want to do his laundry.;P

Krix, you're right. The hair is a completely different post. Frankly, when it comes to Mr. Reeves, Designer or tattered and holey. Long gorgeous locks or entirely bald. Boots or naked feet. Thin as a rail or buffed up and beefy. The man turns me to silly putty.

In an interview a long time ago, he was asked what misconceptions he thought people had of him. He replied, “That I’m short and clean”...

And there you have it! LOL

My theory about those pants (from the Armani suit, so well worn)...he got one pants leg caught up somehow on his bike and had to cut the bottom off, so he just cut the other side off even and kept on wearin' 'em. 'Cause he loves to wear what he loves to wear, who cares what it looks like?!

I truly love his slobbiness, it's such a natural state, isn't it? And contrary to what some others have said, I don't wanna iron for him or do his laundry, 'cause that smacks of "cleaning him up." I reckon I wouldn't _mind_ doing his laundry, especially if it meant he shed his clothes in the vicinity of my washer & dryer, but I'd be just as happy to let him wear the shirt for the third day running, if that's what he preferred. (Help me, I'm MELTING...)

Posted by: keanuette on August 10, 2002 07:14 PM
What's on your mind?.....
(new here? please read this before commenting)
Remember, this is a fan site.
Keanu Reeves is in no way connnected to this website.
Please do not make a comment thinking he will read it.
Comments are for discussion with other fans.
Thank you.