If I could pick any character that Keanu has played to be my boyfriend...
well, I'd have a hard time making a choice.
But up there at the tippy-top of the list is Ted "Theodore" Logan. 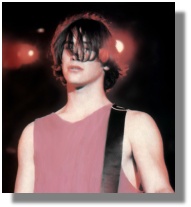 Yeah, Neo's got the moves, but he's way too busy being "The One" and all.
Paul Sutton's a sweetie, but he's a little too sweet for my taste. I'd get bored and end up breaking his heart over a weekend fling with Kevin Lomax.
Johhny Utah and Jack Traven sure are hunk-a-licious, but I couldn't bear having to constantly worry that one day some uniform is gonna show up at my door with a box of ashes and a badge.
Johnny M? ISSUES. And probably pretty high-maintenence, too.
I could see myself with Thomas Anderson, both of us in a little loft, geeking out at our his and her's workstations....but what do do once he's unplugged?
Shane Falco has tremendous boyfriend potential....if I didn't have a history of seasickness.

Aside from maybe Donnie, Griffin and Marlon I'd probably give any character he's played my real phone number.

But, ahhh......Ted.
First off, I love musicians...and ones that don't have a problem having their girlfriend in the band? Bonus.
He's got a best friend that's likeable enough that I wouldn't mind him hanging out all the time, but not someone I'd ever be into so there'd be no complications. His other friends are pretty cool, too.
He makes me laugh. He's adorable.
Plus, he's got a great future ahead of him.

Krix, There is definitely a wonderful "boyfriend" quality to Ted. He has a special sweetness, like a puppy. Yet, all the time you know he could rock your world in every sense of the word.

Yep, "puppy" is definitely a word that comes to mind.

Ooh, and I should add a Thank You to Elsinore for the bitchin' Ted pic.
*smoooch*

What a great run down! Ted is a good choice, but too young for me. I'd have to go with Shane and just have him move in with me, forget the boat except for weekends. Then get the seasick pills. ;)

that was awesome.. and yes, ted was cool and probably my choice for bf too.

"Theo"retically(*snerk*), Ted would be a little young for me, too (although couldn't I use the time travelling phone booth to even things up?)

And thinking about it..I'd want a Ted, but history shows that I'd likely end up with a Conor.

Which, aside from the cheap beer and funky shoes, wouldn't be too bad.

I actually had a Ted once. Actually, two (sort of). If you combined my first two (simultaneous) boyfriends, you'd get Ted. And check this out - their names were Ted and Willie! (Not lying here, I swear.) Ted was a pretty, half-English rose, sang in a garage band. Willie was the bass player - half-Japanese, goofy, sweet, with a killer bod and a heavenly laugh. (REALLY, I'm NOT lying!!) This was in 1980. So you can see why I fell over in shock when I saw BT for the first time!...

And gods, yes - I'd grab Ted in a heartbeat! Though I do think Shane would be more my speed these days...

You're welcome, krix! He has such lovely skin, doesn't he? *Sigh*

Definitely gotta agree with ya there on Ted. But you kno who'd make an even better boyfriend?

Just as adorable as Regular Ted, but with that evil little grin! And he's a robot too, so if you get into a fight? Just unplug him!

I know, I know. I have the best relationship advice.

Hm, I'm the black sheep here. I disagree. I have to admit that Ted is cute, but not bf material. I choose Don John *sigh* I've always thought about what he'd be like once you get to know him. ;)

I agree with Beeb. I love Evil Ted. He's hot!

But regular Ted has always been my favourite. I believe Keanu bought some of himself into this role.

There's Ted hiding in him someplace...

I know I'm late checking in on this one, but I gotta agree with krix, once again! Ted is MOST definitely my first choice for a boyfriend, but I'd want the 2002 version (then he'd be the right age, see...). And hopefully by now he'd have a record contract and all... I would definitely be happy with Shane, though, god what a sweetie and he cares more about his teammates than he does about himself. So unusual in manworld, don't you think?

Posted by: Lori on July 27, 2002 05:05 PM
What's on your mind?.....
(new here? please read this before commenting)
Remember, this is a fan site.
Keanu Reeves is in no way connnected to this website.
Please do not make a comment thinking he will read it.
Comments are for discussion with other fans.
Thank you.