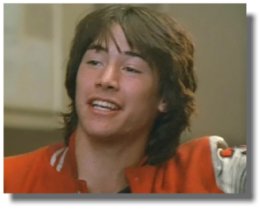 I've decided to rewatch the movies up for discussion over at the Backlot before I commence commentating, but before that I really am going to have to watch Youngblood.
I've had it for months, but just never watched it.
However, the series of captures from the DVD that Elsinore has sent out over the past few days have whet my appetite for some studmuffin-on-ice.
I don't know why I haven't gotten around to watching this yet, especially with my love of hockey. I guess I'll chalk it up to the Rob Lowe factor. Ugh.
BUT, I suffered though the retchfest that is Babes in Toyland so this should be completely bearable.

*Update 7:30 pm:*
OK, I watched it.
What up with Keanu disappearing halfway through?
I'll bet that smarmy Swayze had something to do with it.


"That cute canuck in the crease is distracting everyone from my rugged ambition and toned abs! Off with his head! What? You can't do that? Well, then change the lock on his trailer and tell him filming's over! Fear the mullet!
And fetch me a Perrier!"

Aw, Patrick....I kid. Really.
Actually the movie wasn't that bad, I'd sit through worse just to see Keanu do that cute hop on his knees during the drills a little longer.

Nothing says you can't, zel. I think we should make a pact to not worry about posting similar things, I'm sure we'll have our own take on stuff.

If I knew this guy in Highschool, I would have followed him like a sick puppy. Is he not the most beautiful fella you ever saw?

Here's my take on Youngblood -- slightly better than Babes in Toyland, but MUCH less keanu screentime, so it kinda evens out... I own every keanu feature movie on video EXCEPT BiT and YB, though I did breakdown and buy the YB DVD(haven't watched it yet, but will now that Elsinore sent us these lovely pics). Oh, yeah, I don't own Even Cowgirls Get the Blues, either (aaackk!)

A big 6'1" WORD on that Rhonda. Except take him out of the letter jacket and put him on the debate team or drama club.

Although, I should add that at my high school, you could actually letter in Theatre/Debate (I did).

OK, I watched it again, too, and it was actually MUCH better than BiT. The weakest thing was the love connection; the hockey was hot. And YES, the goalie hop was worth the entire package.

BTW, I know I would totally have been in love with keanu in high school (we probably would have been in the same class). I would have been in LUST with Heaver, though (not too bright, as the Oracle would point out. No, wait, that was Neo. Aaarrggh!) Shut up, Lori, and go to bed!

Isn't Heaver a honey? I love that accent of his. It somehow makes Keanu's voice sound randier, like he's constantly thinking about undressing someone. Someone lucky. Someone like ME, lol!

Posted by: Elsinore :D on June 18, 2002 03:53 PM
What's on your mind?.....
(new here? please read this before commenting)
Remember, this is a fan site.
Keanu Reeves is in no way connnected to this website.
Please do not make a comment thinking he will read it.
Comments are for discussion with other fans.
Thank you.