When my Keanu madness fully took hold beyond just catching the latest movie to spending late nights skipping 'round the Ring of Fire and lengthy email exchanges about just how dreamy and misunderstood Jjaks truly was, it was the pictures that sealed my fate. The first picture I ever saved to my hard drive was this one... 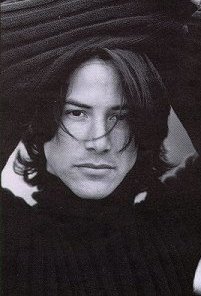 I think it's still my all time favorite.

Like most web-centric Keanuphiles, I have quite a few pictures of Keanu Reeves on my computer.
Some, I didn't even know I had, like this one... 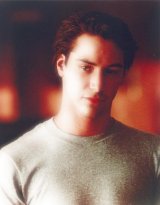 I couldn't tell you how many picture files I have, just that it's way too many. My files are crazily unorganized. Subdirectories within subdirectories with names like "misc", "sortlater" and "stillmorekeanu". I've decided to start getting things in order. I've probably deleted more than 200 pictures since last night. Some were unfinished projects, some were duplicates, some were ones I just plain didn't like.
Like this one...

To me, this doesn't even look like Keanu. It looks like some guy who had plastic surgery to look like Keanu.
I've deleted quite a few pictures for various reasons. "Too skinny" and "making 'The Face'" being high among the list. Others because, well just because something in them didn't whisper "save me". The man has to be the most photographed actor out there. You've got to draw the line somewhere or get a new hard drive. I chose the former. One thing that helps to weed them out is that I try not to have pictures that, in my opinion, probably didn't have Keanu's blessing to be taken. I'm a bad lemur for even having them at all, but with e-mail, you have to download a picture to see what it is, and I have been less than dilligent about going and deleting the various news related and other pics that I get in my inbox.
I can't remember where exactly I read it, but I recall Keanu saying something in an interview or chat once about papparazzi and such. It was basically that there are times when "I wish you didn't take that picture...my Mother wishes you didn't take that picture." So I try and look at them like if it were a picture of me? Would I want copies of it on strange people's computers? And if not, I usually delete it without a second thought. Sometimes, I'll take a good long look at a pic before it goes to the bin, especially if he's doing something cute with his feet.
I can tell you one thing. I can't think of anyone that wishes that this picture was taken...