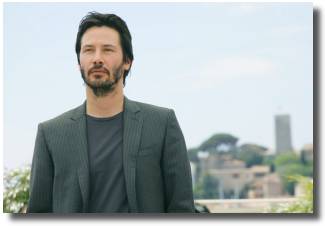 Keanu was recently in Cannes with A Scanner Darkly, which screened in the Un Certain Regard category. I'm not sure what that means....but MonstersandCritics.com has some of the Q&A press conference with the cast and director, Richard Linklater.

Reviews? Mixed.
The Times UK gives the film 4 of 5 stars but The Hollywood Reporter...not so much.

Un Certain Régard is the contest for the art house section -
and the Hamburg member of the jury told me when he got back
ASD should have been screened in the main competition instead of Fast Food Nation...
I've heard of standing ovations at the night screening that the cast attended,
apparently some people *cough*THR*cough* either didn't get it or are out to whip someone again...

Posted by: Niobe on June 2, 2006 03:08 PM
What's on your mind?.....
(new here? please read this before commenting)
Remember, this is a fan site.
Keanu Reeves is in no way connnected to this website.
Please do not make a comment thinking he will read it.
Comments are for discussion with other fans.
Thank you.